TS-82-30
Robin Johnson and Trini Alvarado are New York teenagers whose runaway antics and revolt against authority make them the talk of The Big Apple through the radio reports of an all-night disc jockey in “Times Square.”

The last photos from the press kit. To the left, Pammy and Nicky on the roof from which they toss their first television set, although here Nicky appears to be translating a radio broadcast for Pammy. Nothing like this occurs in the film; this photo, however, will be turned into a line drawing and used to advertise the movie’s opening in Germany. Its full code number is nearly impossible to see, as it’s written in white against the white background in the lower right corner. The first three segments (TS-82-30) are on the caption sheet. I think the last segment is “/4.”

To the right is the photo from which the last image on my post of stuff I found on the Web was edited, as Sarah from Vintage Salt informed me shortly after that post went up. I even had a version of that same picture as my Facebook cover image at the time, and somehow I just never made the connection. It’s another of the many photos taken of the concert.

Heeeeere’s Johnny! A glamour shot of Tim Curry as Johnny LaGuardia, in costume for his reporting on the final concert, standing on the balcony of the Candler Building overlooking the Times Square Theater. His telescope is visible there at the right.

TS-42-11A
Robin Johnson effects a garish costume and make-up as she and her fellow teenage runaway flaunt authority as the “Sleaze Sisters” on their wild dash through the back streets of New York City in “Times Square.”

And finally, Robin. This must have been taken at the same time as this slide, but this is the shot they went with. I’d love to see it in color.

To wrap things up, here is the press kit’s biography of Robin. It’s four pages. Trini gets two pages. Robert Stigwood gets three. Tim Curry only rates one page. Someone certainly realized which side their promotion was buttered on.

It features a second, longer telling of her “discovery,” as well as her view of the production as a job, and not one she was necessarily even considering continuing.

At some time in the future Brooklyn’s Technological High School steps may become legendary as the spot where a star was “born,” the 1980 equivalent to Hollywood’s Schwab’s Drugstore. On those steps and waiting for classes to begin, 16-year-old Robin Johnson was discovered by an (unknown) casting scout on the lookout for possible candidates for the leading role in “Times Square,” an October release from AFD (Associated Film Distribution).

“He gave me this card and said to call this number if I was interested in being in a movie,” Robin recalls in her inimitable Brooklyn-accented speech. “I thought: Wow! Another wise guy. But I gave it a shot.”

What Robin didn’t know at the time was that the film’s director, Alan Moyle, who had written the original story for “Times Square” with Leanne Unger, was determined to cast only the young actress who would be precisely right for the crucial central role of Nicky Marotta, a spunky teenager loose and without adult supervision, determined to become a rock star. The talent search already had bypassed many of the traditional avenues and scoured youth centers, punk rock clubs, and placed ads in papers such as the Village Voice, Soho News, and Aquarian.

“We were looking for someone who WAS Nicky,” Moyle admits. “Robin is definitely not that doomed child. Luckily for the film, Robin brought a lot more humor to the character than what I had originally envisioned. Her youthful innocence and energy buoy up what might have been played as too much of a downer.”

Without any previous experience (“I had sung in a choir when I was 12”), Robin won the role over literally hundreds of other candidates. Upon winning the role, she entered an intensive program of singing lessons and a dance and movement regimen. Making this film meant that the novice had to be transformed quickly into a seasoned professional. Robin worked seven days straight for 12 weeks. As a minor, the new “star” had to continue her studies with a tutor on the set and more learning sessions on Saturdays. On Sundays, recording or dancing demands took up the day. Veteran members of the New York film crew were dazzled by the professionalism of both Robin and her even younger co-star, 13-year-old Trini Alvarado. Both exhibited an almost non-stop flow of dedication, energy, high spirits and raucous good humor.

Robin Johnson lives with her older sister Cindy and their mother in the Park Slope area of Brooklyn, New York. Born May 29, 1964, Robin never gave any thought to becoming an actress until “Times Square.” Her inclination previously ran to sketching (“I’m not into landscapes; give me cartoons with some people in there.”) and, whenever the opportunity arose, banging on drums. And although she first started “dating” when she was 11, she’s not worried about permanent relationships at this point in her life. “I’m closest with my sister Cindy, who’s a year older. We’re both Geminis and I like to argue, especially in a friendly way.”

As do many young women her age, Robin can identify with Nicky’s rebelliousness and non-confirmity, traits which land Nicky in trouble with the law and into the arms of a concerned social worker. “Nicky can’t put things over on her like she does with others,” Robin figures, “and that’s the reason she admires her. I have trouble with authority figures, too, which means anybody with the upper hand—my principal, my mother, my teachers.”

Of director Alan Moyle, who might be considered the supreme authority figure, Robin has only praise. “We’re alike in certain ways and that made it easier to relate. Alan’s absolutely brilliant for inspiration, for giving you energy for a scene. When he believes you can do a scene better, he gets you to think, but not with bullying or intimidation I really want to work with him again.”

Robin perceives Nicky as a teenager, masking what she really feels and tried to “make her real.” “She was bitter about being abandoned. Her dad’s a loser. All she can do is pity him, not be mad at him now. Nicky has a lot of gutsiness that I really admired. Her philosophy always was: ‘When you’re mad, show it.'”

Gutsiness is a trait Robin and Nicky have in common. Robin, as well as being bright, witty and talented, is seemingly fearless, whether performing atop a 42nd Street theater marquee or being dunked into the icy December brine of the polluted Hudson River. “Nerves don’t get you anywhere,” she says, simply enough.

Robin was coached for “Times Square” by veteran Sue Seaton, who has worked with the spectrum from Katharine Hepburn to Gilda Radner. But that throaty timbre is unmistakably Robin’s own, perhaps a result of her ever-present Kool cigarettes (“Kools are cool”).

The closest Robin had ever been to a movie set before “Times Square” was when “The Wanderers” shot a scene down the block in her neighborhood. Now, the world of movies is opening for her. “Let me tell you about this movie business,” she says seriously. “There’s no right for anyone to get an attitude just because so many people are aware of your job. What I say is, it’s entertainment and it’s a job. I hope ‘Times Square’ does well, but it’s not the answer to my life. Most, I loved meeting and working with so many wonderful people.”

There is one confession she’ll make when prodded about the rigors of working in the realm of make-believe: “Oh yeah,” she says with a grimace, “chewing the roses was pretty disgusting. I’d never tasted flowers before.”

“Times Square,” starring Robin with Tim Curry and Trini Alvarado, is a Robert Stigwood Presentation, directed by Alan Moyle from Jacob Brackman’s screenplay. The new film was co-produced by Stigwood and Brackman, with Kevin McCormick and John Nicolella as Executive Producers and Bill Oakes the Associate Producer. 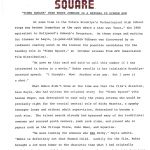 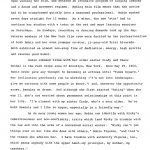 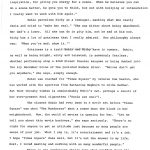 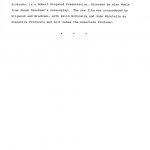