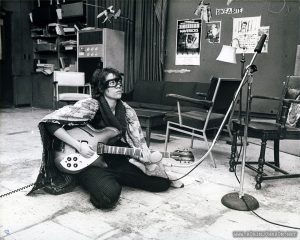 “29. In a distressed condition, Nicky (ROBIN JOHNSON) tries to tell her story in the radio station. A scene from “TIMES SQUARE” distributed by COLUMBIA/EMI/WARNER Film Distributors.”

The promotional stills for Times Square in the UK generally had a few things in common. They were full-bleed, with no white border like their US counterparts. When they did have a border, it was even all the way around, where the American ones often had a large area at the bottom with the name of the film and the distributor (and in some cases, a caption). And, where the US stills had a complicated number written near their bottom edge (in the style of “TS-72-8A/14”), the UK ones had a tiny one- or two-digit number written on what looked like a small pasted-in square. Most of them also had “TIMES SQUARE” stamped on the back; this one doesn’t. 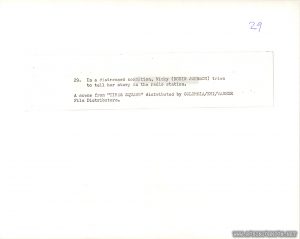 This one also doesn’t have the number anywhere on its front — I’ve checked with varying levels of darkness and contrast, and it’s not just hard to see, it isn’t there — but it does have a piece of paper pasted to its back with the number and a caption. The number is also handwritten in blue ink, and there’s a little blue scribble on the front — I don’t know whether that’s part of its original condition or if it was added later.

The UK Press Kit contained photos 1 – 11, although the eleven photos in my copy are almost certainly not all the ones originally issued with it. The highest numbered shot from this series I’ve yet found is 36, the widely distributed head shot of Robin as Nicky used on the American movie poster and the soundtrack album cover.

This particular photo was also half of a two-photo 8×10, also used for promotion in the UK. This one had a slightly longer caption, and included a credit for Robert Stigwood that misspelled his name “Stigward.” I’ve found two of these 2-on-1’s so far, and finding this item leads me to suspect, or at least hope, that the other three images used on them will also one day turn up as 8x10s.

Judging by the angle, this was taken shortly before the picture on the UK lobby card. The shooting schedule was so short that it must have been the same day as the take that appeared in the film, but the publicity shots are all from either run-throughs or alternate takes, or were staged expressly for the publicity stills.

“If the story sounds as though it makes sense, it doesn’t…” 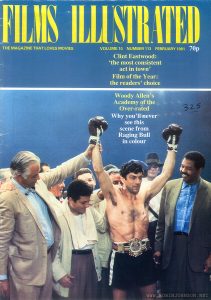 This was dated February but was probably on the stands while Times Square was still in theaters. EMI certainly expected it to be so, judging by the advertisement that appeared on page 162. 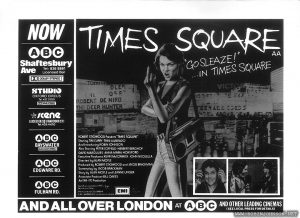 It’s almost identical to the ad that ran in Record Mirror, probably at the same time.

Page 177 contained a review of the movie by David Quinlan, accompanied by one of the photos Mick Rock doesn’t really remember taking of Robin. Mr. Quinlan’s review is typically fair for the time: it’s a bad movie that nevertheless has something genuinely affecting in it, rooted in “the gutsy performances of the girls themselves,” particularly Trini, bless his heart. 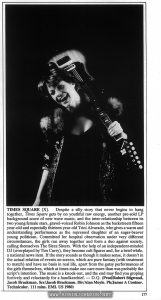 TIMES SQUARE (X). Despite a silly story that never begins to hang together, Times Square gets by on youthful raw energy, another pre-sold LP background score of new wave music, and the inter-relationship between its two young female stars, gravel-voiced Robin Johnson as the backstreets fifteen year-old and especially thirteen year-old Trini Alvarado, who gives a warm and understanding performance as the repressed daughter of an eager-beaver young politician. Committed for hospital observation under very different circumstances, the girls run away together and form a duo against society, calling themselves The Sleez Sisters. With the help of an independent-minded DJ (overplayed by Tim Curry), they become cult figures and, for a brief while, a national news item. If the story sounds as though it makes sense, it doesn’t in the actual relation of events on screen, which are pure fantasy (with treatment to match) and have no basis in real life, apart from the gutsy performances of the girls themselves, which at times make one care more than was probably the script’s intention. The music is a knock-out, and the end may find you groping furtively and reluctantly for a handkerchief. — D.Q. (Prod/Robert Stigwood, Jacob Brackman. Scr/Jacob Brackman. Dir/Alan Moyle. Ph/James A Contner. Technicolor. Ill mins. EMI. US 1980) 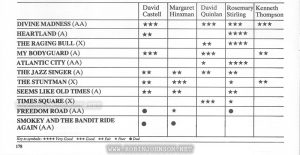 On page 178, we find that Mr. Quinlan gave Times Square 3 stars, and his colleague Rosemary Stirling gave it only one. Perhaps we should be glad she didn’t write the review the magazine printed. Perhaps it would have been interesting to see what she might have had to say about it.