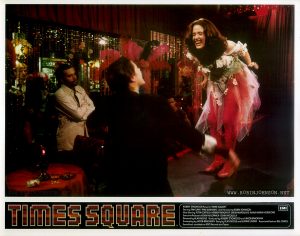 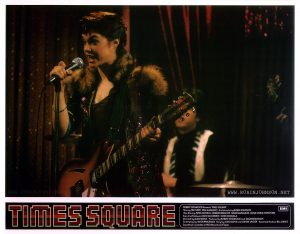 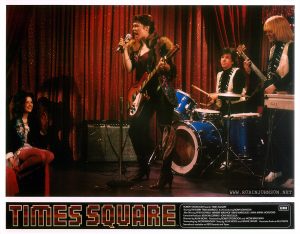 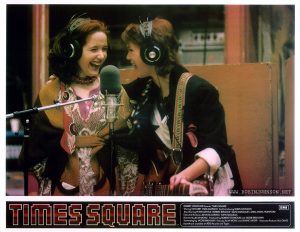 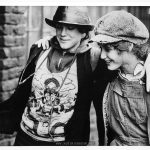 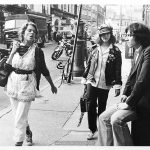 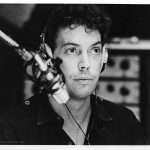 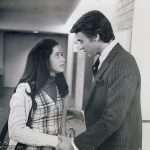 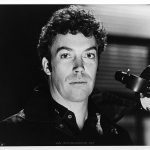 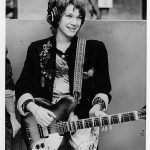 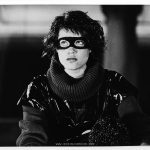 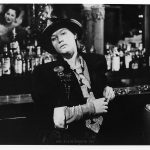 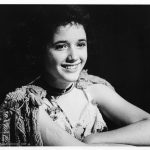 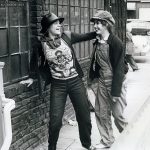 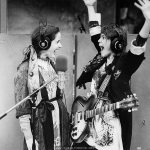 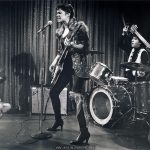 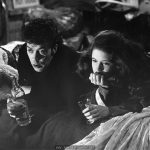 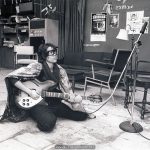 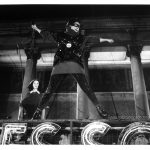 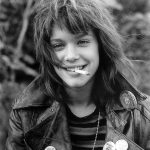 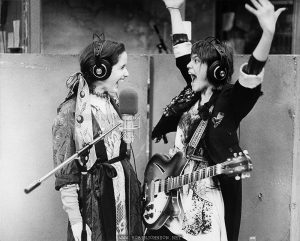 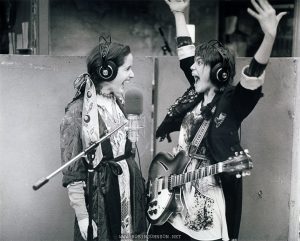 Typically, shortly before my last post was published (but weeks after I’d initially written it), five more stills from the UK series turned up. Two were duplicates of numbers 20 and 29, but the others were new to me. They follow the series’ general conventions of being black and white 8×10″s with no border, a handwritten number on a tiny square inset along the bottom edge, and a paper strip taped to the back with a typed caption.

This first one I’d been passing up for maybe nearly a year, since Robin isn’t in it and it’s essentially a duplicate of TS-117-13/15, although less cropped, but I picked it up along with these others when I realized it was might be part of this series.

I have some doubts over whether it truly belongs in this series, though, first because the caption sheet taped to the back seems to belong to a different photo, and doesn’t have the photo number on it:

Robin Johnson is a runaway teenage product of the streets who dreams of becoming a rock music star and lets nothing get in her way to make it to the top in “TIMES SQUARE”.
“TIMES SQUARE” a contemporary drama with music starring Tim Curry, Robin Johnson and Trini Alverado, is a Robert Stigwood Presentation, produced by Stigwood and Jacob Brackman and directed by Alan Moyle from Brackman’s screenplay, based on the story by Moyle and Leanne Unger, with Kevin McCormick and John Nicollela the executive producers and Bill Oakes the associate producer. “TIMES SQUARE” is distributed by Columbia-EMI-Warner.

Robin’s not in the photo, Trini’s name is spelled wrong, and the film distributors’ names are separated by dashes instead of slashes. In fact, the caption is identical to the one on the caption sheet attached to this photo of Robin from the US Press Material folder, except for the typos and the addition of the UK film distributors. The strangest thing is, though, I already have a photo #4 from this series, and it’s of Tim Curry. Both these photos are unmistakably labeled “4”. I’m keeping them both until I find out if one or the other doesn’t belong. I suspect this is the one that should be categorized somewhere else.

The other two are definitely part of this series: 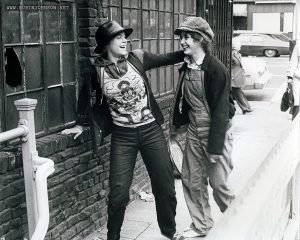 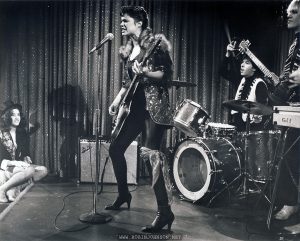 #13 appeared in Photoplay Vol 32 No 1, January 1981, and in the Japanese souvenir program book. A copy of this photo is probably the source of those images.

#29 looks to have been taken within seconds of a shot that appeared cropped in the center of Japanese program book and on a lobby card I don’t have (but Karen Dean [DefeatedandGifted] does), and this color shot. Like that last one, this photo as far as I know was never published and may be making its first public appearance here. It’s probably safe to say that any shot of the performance of “Damn Dog” in the Cleo Club, like the 35mm slide, was taken at the same run-through as this one. None of these shots are of the performance given for the take in the film, even allowing for a different placement of the still and movie cameras.

I promised in the last post, which went up twelve days before this one but was written two months before, that I’d post a collection of all the photos I have from this series once I had fifteen of them, and I now have sixteen, counting both number 4s. So, that will be the next post.

The center two pages of the Japanese souvenir book feature, alongside a somewhat out of place Yankees logo, three beautifully reproduced photos.

The first, of Pammy and Nicky atop the Times Square Theater marquee, isn’t a frame from the film, and I haven’t yet found it as a publicity still, so it would seem to be making its first and possibly only appearance here.

The inset of Nicky singing in the Cleo Club looks like it was taken just before or after this publicity still (discussed here). This will turn up again later on the Mexican movie poster.

And the last shot: in the film we don’t see see Nicky’s face and the knife on her wrist in the same shot. This photo would seem to have been taken between AFD publicity still TS-109-16/12, which appeared in the US Press Material pack in 1980, and TS-81/34 from 1981, which I don’t have, but Karen Dean (DefeatedandGifted) does, along with several other Items I haven’t got. (Actually I’m fairly certain I do have a version of TS-81/34, but not as an AFD print, but consarn it I can’t seem to find it.)

This last shot would also seem to be making its first and only appearance, and isn’t it beautiful? I don’t know if it comes across in my digitization, but something about the lighting and quality of the printing make it look almost like a painting.

Incidentally, I just noticed that TS-C-34/29 in Karen’s collection is the same photo as the one that accompanied the film review in Playboy Vol. 28 No. 1 from January 1981, which until this moment I thought had only ever appeared there. Now I suspect that the “C” that appears in some of the AFD press photo code numbers means that there’s also a color version somewhere.

I also came across a photo I’d gotten several years ago and totally overlooked while preparing items for this blog. I think it’s a rejected publicity photo, the only one of three shots taken within seconds of each other not to see the light of day… until next time.