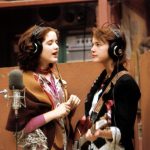 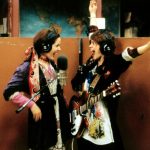 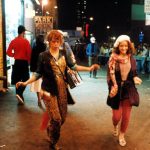 There were no lobby cards for Times Square in the US, only 8″ x 10″ black and white stills. The rest of the world was more fortunate.

At least eight lobby cards were released to theaters in the UK (although I suspect there was at least one more). Some of the photos hadn’t previously been used, as far as I know. The cards, like the aforementioned stills, measure 8″ x 10″, but the colors somehow give an impression of greater size.

This is the first time we’ve seen this photo of Tim Curry as Johnny LaGuardia, although it’s from the same session as TS-66-28/9 from the US Press Materials Folder; photo #4 from the UK Press Kit, which had been published in the Aquarian and Prevue; and the tiny photo from the Press Folder which was also used inside the soundtrack gatefold cover (except in the UK).

And, this is the first time we’ve seen a shot of Pammy from this early in the film. Even more unusually, Trini is looking directly into the camera. There are very few photos of the actors on set and in costume playing to the camera. This… um… is one of them.

And here’s a photo we have seen before, of Nicky and Pammy walking west along 42nd Street, on their way to Times Square to look for Nicky’s dad. This shot appeared in the Press Folder, and as a black and white print on Kodak paper whose date and purpose I’m not entirely sure of. This is the most complete, uncropped, version of this image I’ve yet seen. (I do have a crummy-looking little .png file that shows a smidge more at the top and on the right, but cuts off some of the left and most of the bottom.) I’ve previously posted a version of it which been scanned by Baseline Research and posted by Cineplex, lacking the text strip at the bottom. They posted five images, four of which appear to be these lobby cards with the bottoms cropped off. I’ve already posted the fifth… but I won’t link to it or the others here because I intend to do it again at the end of this series.

Needless to say (but when have I let that stop me), none of these images match up to the film. Johnny smiles all through the shot his lobby card would appear to come from. We only see Pammy in her pajamas and headphones from outside her bedroom window. And as I’ve mentioned many times before, the sequence of Nicky and Pammy looking for and finding Nicky’s dad was removed entirely from the film, probably before it was finished being shot.

The cards all have this text at the bottom:

TIMES SQUARE AA
An EMI-ITC Production
EMI A Member of the THORN EMI Group
Released by COLUMBIA – EMI – WARNER Distributors Limited.
This copyright advertising material is licensed and not sold and is the property of National Screen Service Ltd. and upon completion of the exhibition for which it has been licensed it should be returned to National Screen Service Ltd. Printed in Great Britain.