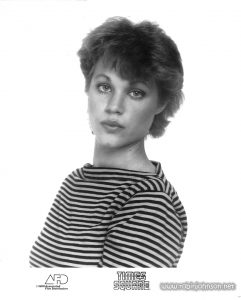 TS-Spec.3
Robin Johnson makes her motion picture acting and singing debut after being discovered by chance at her high school in Brooklyn for the co-starring role with Tim Curry and Trini Alvarado in “Times Square.”

This is one of my favorite pictures of Robin, appearing for the first time not in character. I agree with DefeatedandGifted that it wasn’t part of the US press kit, even though it’s designed identically and even came with a folded-over caption sheet, just like the the photos in the press kit. However, none of the press kits I’ve seen contained it; I think if a press kit turns up with one of these in it, it’s because someone has recently inserted it thinking it belonged there.

Also, it has a different numbering system. “TS-Spec.3” sets it apart from the press kit photos, whose numbers imply scene/shot numbers. “Spec.” seems, well, special. And the “3” implies to me that there are a “1” and a “2” somewhere — headshots of Trini Alvarado and Tim Curry, perhaps? — but I’ve never seen anything like that. As far as I know, only Robin got a photo from AFD as herself. 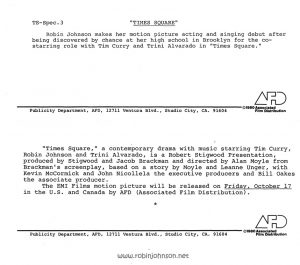