The Concert in Times Square 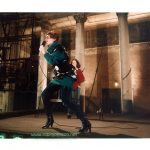 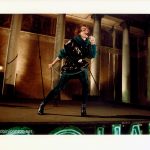 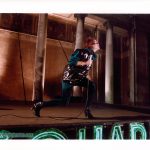 I’m breaking my rule of one picture per post again, but these are so similar to each other it seemed silly to stretch them out over three posts. These are the last of the Kodak 8 x 10’s: three shots of Robin atop the Times Square Theater marquee. In the first one, you can see not only Robin’s safety cable, but Trini’s as well, along with a couple crew members keeping an eye on them. You might think it’s JoJo and Simon from WJAD, but in the film they can be clearly seen sitting on the Apollo Theater’s marquee with the Blondells. These guys are production safety deputies.


The Times Square Theater seems to be cursed. It’s the one property on New 42nd Street that no one has been able to do anything with. Plans are continually being made, a tenant is announced, and then nothing happens. At least the facade is visible now; for years it was completely hidden behind a canvas shroud announcing the opening of a Marc Ecko store, which needless to say never opened. At the heart of Times Square is the plan by Pammy’s father to clean up Times Square, and that actually happened less than ten years later… now, every property in Times Square is actively serving a thriving tourist trade… except the Times Square Theater, which remains empty.

In my opinion, its best use would be as an Alamo Drafthouse, screening the kind of repertory films that used be in small theaters all over the city until the little cinemas that showed them closed one by one. But odds are there’s no way to make such a venture sufficiently profitable in that space, since it apparently isn’t sufficiently profitable in no end of less desirable properties. Part of the problem is that apparently the Times Square Theater has no back entrance; directly behind it, along 43rd Street, was the auditorium of the Apollo Theater (now the Lyric), whose entrance ironically ran through the front of the Times Square Theater (confused yet?). What this means is, the only way to load in and out is through the front on 42nd Street, making it very difficult to work with, especially as a performance venue. (All this information comes from the Wikipedia pages for the Times Square and Apollo Theaters, and the sources linked there as references.)

With that in mind… towards the end of the film, Pammy drags Nicky out of the radio station (to the faint strains of “Help Me!”), and around the block to the rear entrance to her father’s offices. This is quite clearly on 43rd Street, where it should be;

behind them we can see the sign of the Strand Hotel

which was located at 206 West 43rd Street. Later we get a clear shot establishing that the “Times Square Renaissance” project has taken over the Apollo Theater, so the door Pammy and Nicky go in does indeed lead into the Apollo. The Blondells and the WJAD people load in the Blondells’ equipment through a pair of large theater doors that are not the door Pammy got in through, and are not on 42nd Street, so it’s safe to assume they’re the main theater exit from the Apollo (the kind of doors the Times Square Theater does not have), and they go through the Pearl offices and up to the Apollo’s marquee. But how did Nicky and Pammy get into the Times Square theater next door, unseen by the growing crowd in the street, and at what point did JoJo or Simon… well, there was room for a great

little shot where someone setting up equipment on the Apollo marquee tosses a wired microphone over to the Times Square marquee.

No, despite the Apollo’s lobby running through the Times Square’s facade, these are two separate buildings, only one of which opens onto 43rd Street. While there may possibly be some emergency door between the two, really the only way Pammy and Nicky could get to the Times Square Theater’s marquee is with the magic powers they used during their escape through the Adonis Theater, materializing from roof to roof and walking through buildings that are next to each other but not actually connected.

Or, maybe I should “just repeat to yourself ‘It’s just a show, I should really just relax.'” But where’s the fun in that?

And now, the closest frames from the film. 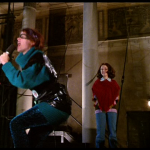 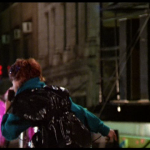 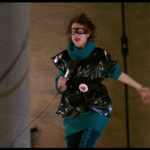 One last thought… Nicky first appears out of a crowd of people, walking west on 42nd Street, right in front of the Times Square Theater and past the entrance to the Apollo. At the end of the film, she leaps from the marquee of the Times Square Theater, heads west on 42nd, and disappears into a crowd of people just past the entrance to the Apollo. This is of course because Nicky doesn’t really exist: she’s a spirit of the city, a personification of the visceral life in 42nd Street Johnny is always talking about, called into being to help Pammy, and when her job is done vanishing back into the street until she’s needed again. I need more sleep.

It has a tiny number “34” printed onto its front. The back bears a stamp reading “TIMES SQUARE,” a handwritten “34” in black ink, and in blue ink a different hand has written “Robin Johnson, Trini Alvarez.” It’s probably safe to say the last was added by a memorabilia dealer who wasn’t too familiar with the movie.

This moment in the film is comprised of two shots: one of her kneeling and starting the jump, the other of her in the air and landing. In the frame that would

match this exact moment, her head is facing the other way and mostly out of the shot. Don’t believe me? Here it is:

This photo is in black and white. An almost identical shot that looks like it was taken a fraction of a second later was published in color in a German magazine in 1982. This leads me to speculate (as I may have before, but I can’t be bothered to check now) that all these photos were taken in color, and some were distributed in black and white… for newspaper reproduction? To save money on printing costs? — or that some of them at least are edited movie frames from unused takes. I doubt this though because there’d be a lot more motion blur in them. You can see the blur in the frame capture above, while the still is sharp.

And that’s really all I have to say about this. Sorry to disappoint you. But I will leave you with one question… Take a look at that frame capture from the movie, and tell me: what color is Nicky’s sweater? Whatever your answer, we’ll continue to ask that question for a couple more weeks at least.

What’s that? You want to see the picture in the German magazine? I told you, that was published in 1982. It’s barely 1980 here. Hold your horses.

Despite recent appearances, this is a Robin Johnson site, not a Times Square site. But, for better or worse, there’s far more Times Square material out there than for the rest of her career combined. Plus, the vast majority of her fans (though not all) found her through Times Square. So I’ll be posting the occasional Times Square item that Robin isn’t in. And today, I’m also breaking my general rule about one item at a time, because these two are so close together in the film.

The first is one of the 8″ x 10″ color prints on Kodak paper, and shows Pammy in the middle of demonstrating her new moves to another Cleo girl. The second is the second of the slides, and shows her reacting to seeing her father in the club. Again, they don’t match up to the shots used in the film, mostly because the POV seems to be standing directly behind where the other dancer is sitting. The first shot might conceivably have been taken during the actual take, but Trini’s hands and feet are in different positions in the second one than they appear in the film.

This scene is notable for containing one of the few appearances of the “Doomsday Book,” the giant ledger Pammy bought to document her and Nicky’s lives in a scene cut from the film, and which Nicky methodically burns page by page at the end. It’s visible lying on the keyboard in the first picture. It’s the one thing Pammy grabs as she runs out of the club.

That’s all I have to say about that. I’ve been unsuccessful so far in figuring out the location of whatever bar served as the Cleopatra. If I ever do work it out, you’ll be the first to know.

Here, for tradition’s sake, are the closest frames from the film:

Nicky Marotta in the Studio

The WJAD studio, that is. This is an 8 x 10″ print with no border, with the little handwritten identification number 69-34A-4 added to the print in the lower right-hand corner. It was shot during the filming of the “Your Daughter Is One” performance, but doesn’t come close enough to any shot from the film to even try to find a similar image. At no point in the film does Nicky turn to her left and smile; she spends the entire scene facing the microphone.

This photo will appear again at least once, in the American press kit folder. That version is smaller, to allow for a border, and is cropped at the top and bottom, but shows a tiny bit more along the left edge. It has the same number, but it’s rewritten in a slightly different format, because the one that appears here is cropped out. I don’t know for sure that this one predates that one, but I have to make some kind of decision of what order to put these in. This series are all photos that don’t have “Times Square” printed on them.

Not on the front, anyway. This object has handwritten on the back in black ink, “Robin Johnson / ‘TIMES SQUARE'” at the top, and “Times Square” in yellow ink at the bottom. Those were probably added by memorabilia dealers or previous owners. You’ve probably noticed that it’s also signed on the front by Robin… yes, that’s really her signature. No, I’ve never met her. That’s an autograph from back in the day. This item came from England, so it was probably signed during her publicity tour for Times Square in January 1981. Should I have waited to post this until I get to the stuff from her trip to England? Too late, here it is.