Before moving on, I mentioned some time ago some pictures I’ve only seen on the Web and not found any physical copies of. So, here they are. Some of them anyway.

I’d found a bunch of these at Cineplex, having been digitized by Baseline Research, but as I was assembling this post I found that about half of them were taken from a set of 1981 UK lobby cards. Since they’re all the same size, that would lead me to suspect that there are more lobby cards that I haven’t found yet. (There also seem to be two entirely different sets of UK lobby cards, but I’m getting ahead of myself.) But without knowing for sure, these are just free-floating publicity stills with no provenance before being scanned in 2010, and I’m putting them here. 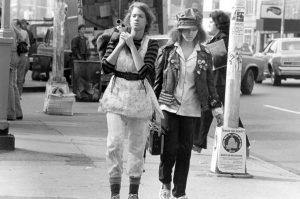 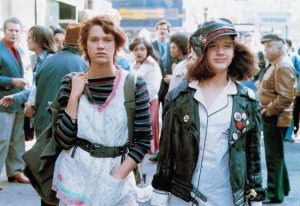 The first was used to promote the May 21, 2014 screening of Times Square at the Brooklyn Academy of Music. I’d never seen it before. The second is the most complete version of that image I’ve seen, and it turns out to have been a UK lobby card. (I’ll post the lobby cards when Times Square opens in England. Right now, they’re still trying to put the soundtrack and US ad campaign together.) 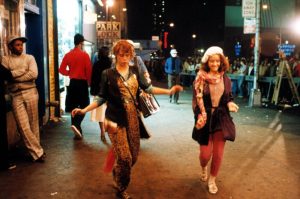 This one was also printed in black and white by Associated Film Distribution in the format of the photos used in the US press kit.

You can see it here at DefeatedandGifted’s “Times Square Fandom” blog, along with 3 other photos I don’t have. Strangely, those photos are copyrighted 1981 by AFD, and as far as I know AFD wasn’t promoting the film after it closed in the US in November 1980. They certainly weren’t included in the US Press Materials folder. Back to this particluar image, it’s the other shot that shows some behind-the-scenes action that I mentioned here: you can see a crowd of kids behind a barricade watching the filming. 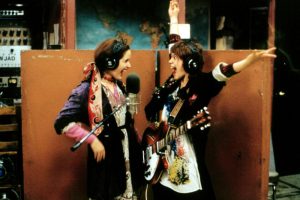 This one was used many times, but this version shows more of the background than any other I’ve seen. 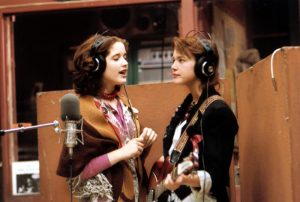 Both Trini and Robin just look so angelic here. I love it.

And, look closely at Nicky’s guitar. Compare it to the picture above. This photo was taken before they taped over the word “Rickenbacker” on the headstock. There are a few publicity stills where the guitar’s make is visible, just like there are quite a few of Robin holding a Kent with its big distinctive “K,” but in the film the guitar brands are both blacked out. 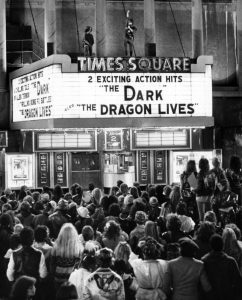 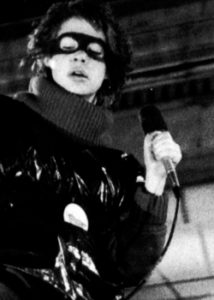 If I come across physical copies of any of these in the future, you’ll be the first to know.