More stills from the UK series

I nearly passed over this lot of five black and white stills, except it had one photo I’d never seen. Rather than try to haggle for just the one photo, I bought the lot, and I’m glad I did, because they’re all from the UK series, three of them were new numbers, and the others are slightly different again from the previous copies I have.

This shot is number 41, and the highest number I’ve yet found. (I have 18 of them.) It’s the one I thought I’d never seen, but I was wrong: it was published on the back of the “Times Square Trailer” UK soundtrack sampler record sleeve. 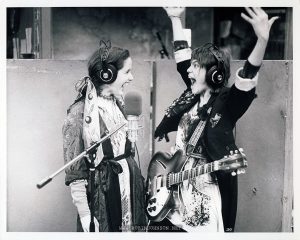 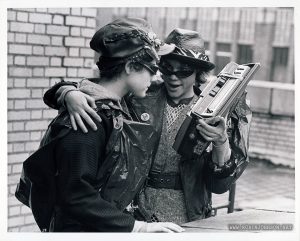 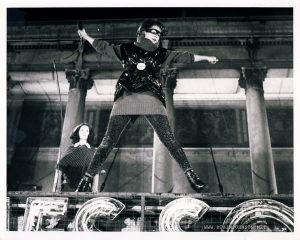 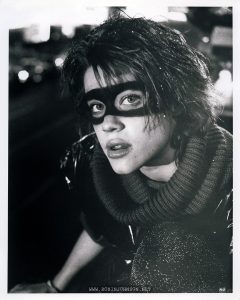 All five have borders, where most of the series are printed full-bleed, all the way to the edges. Number 20 is the third copy and the third variant I’ve found. The first had the number printed to the right, against the grey background. The second was cropped more generously at the bottom, and had the number against the black of Nicky’s coat, but cut off at the bottom.. This one is cropped like that second version, and has the number in almost the same place, but up a few millimeters so it can be seen clearly. It also looks like it’s the exact same number stuck on the print – the handwriting looks identical in all three. I suppose this is obvious to anyone who works in movie promotion, but I am not one of those people — it would seem that whenever they needed more copies of an image, they dug out the negative, stuck on the number, and ran off a few prints, and every run ended up slightly different from every other.

Number 23 is TS-82-30/4, but cropped more generously at the top and bottom and more narrowly on the left and right. Number 34 is a second copy of the first photo I ever found from this series, but it’s printed much lighter, washing out Pammy’s face, and the number has moved from just to the left of the neon “Q” in “TIMES SQUARE” to inside the curve at the right. And number 40 is TS-42-11A/2, printed lighter with higher contrast, and cropped more generously at the left and bottom. Although it seems obvious now, seeing this is the first time I’ve realized that this shot, along with this one and this one, were taken as Robin was kneeling on top of the theater marquee, and the blurred lights behind her are the street below.

These prints were distributed in Israel by Stiller Film Ltd., whose partially visible stamp on their backs indicates that they had a local office in Tel Aviv. The prints also have the TIMES SQUARE stamp found on the backs of many, but not all, of the UK series, and what I believe is Times Square in handwritten Hebrew.

Pages referred to but not linked directly above: