… was, for some reason, the title of the promotional soundtrack sampler in the UK. 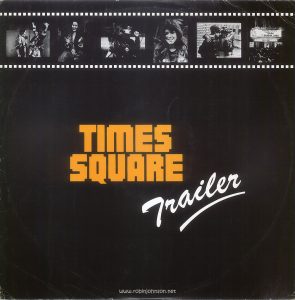 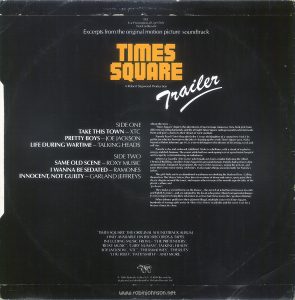 It’s a much more attractive package than the US sampler, with a strip of stills across the top emphasizing that yes, there’s a movie involved, as opposed to the US white sleeve that seemed to want to distance the soundtrack album from the film. 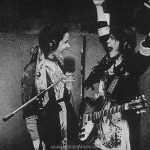 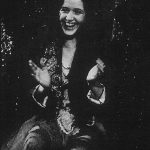 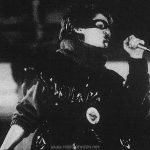 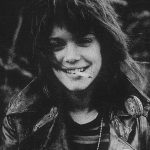 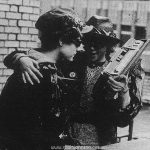 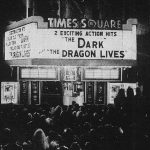 The first, fourth, and fifth photos in the strip are TS-72-8A/14, TS-57-26/1, and TS-82-30, edited from the stills in the Press Materials folder. The second one, the shot of Pammy applauding, is unique to this item as far as I know. The third and sixth ones, of Nicky during the final concert, may also be unique to this item but there were more photos taken during that shoot than at any other time during the production, and at the time of this writing I certainly haven’t collated all the ones I have.

The synopsis of the film mentions Johnny broadcasting from the top of the Allied Chemical Building, which is where WJAD was located in the May 1979 screenplay. The station was moved for the actual film to the top of the Candler Building. None of the other promotional materials for the film mention the Allied Chemical Building. The synopsis writer was apparently working from an early draft of the screenplay, and not the film itself.

‘Times Square’ depicts the adventures of two teenage runaways, New York girls from different social backgrounds, and the all night Times Square radio personality who befriends them and gives a boost to their dream of rock stardom.

Pamela Pearl (Trini Alvarado) is the 13 year old daughter of a young New York City politician who has been given the job of cleaning up the seedy Times Square area. Nicky Marotta (Robin Johnson) age 16, is a street delinquent who dreams of becoming a rock and roll star.

Pamela is shy and awkward, inhibited. Nicky is rebellious, with a streak of explosive energy and dark humour. They meet while both are undergoing tests at a psychiatric hospital and escape by commandeering an ambulance.

Johnny La Guardia (Tim Curry) who broadcasts from a studio high atop the Allied Chemical Building, considers Times Square his personal domain. Pamela had written to him anonymously. Intrigued, he promotes the story of the runaways, urging the girls on, and turns them into minor media celebrities. It also makes things uncomfortable for Pamela’s father.

The girls hide out in an abandoned warehouse overlooking the Hudson River. Calling themselves The Sleaze Sisters, they dress in versions of down and outers, spray paint their sleaze slogans around the town, and inspire others to reject the smooth superficiality of the plastic culture and ‘go sleaze’.

They make a second home on the Deuce – the stretch of 42nd Street between Seventh and Eighth Avenues – and are adopted by the locals who protect them from potential danger. Events conspire to bring their adventure to a close, but Nicky insists they ‘go down flaming’.

When Johnny publicizes their planned illegal, midnight concert in Times Square, hundreds of teenage girls arrive in ‘Sleez (sic) Sisters’ wardrobe and the scene is set for a bizarre climactic close.

The record contains six tracks like its US counterpart, but has only two in common with it (“Life During Wartime” by Talking Heads and “Same Old Scene” by Roxy Music). 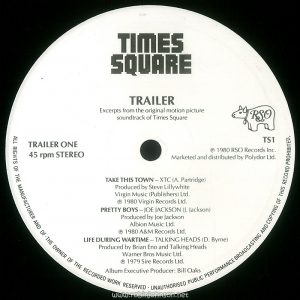 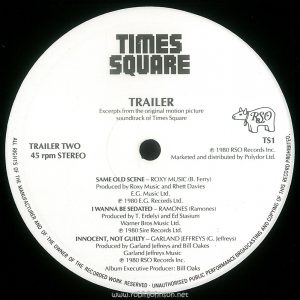 It leaves off the two versions of “Damn Dog” and “Help Me!” and the Pretenders’ “Talk of the Town,” replacing them with the Ramones’ “I Wanna Be Sedated,” XTC’s “Take This Town,” Joe Jackson’s “Pretty Boys,” and Garland Jeffreys’ “Innocent, Not Guilty.” “I Wanna Be Sedated” was two years old at this point, but as to the others: “Take This Town” was recorded for the movie and it would be several years before it would find another official release on the compilation Rag and Bone Buffet, and the other two songs would be released on albums by the artists within the year but in entirely new recordings. I just find it interesting that one-third of this record is recordings whose only official release was on the Times Square soundtrack.
comments: 0 » tags: 1980, promotion, RSO, soundtrack, UK