By August 1981, Robin might already have figured out that neither she nor Andy Gibb were going to get a call telling them when to report to the Grease 2 set. Most of the world had already forgotten about Times Square. But it wasn’t quite over yet.

Thailand’s Filmstar magazine devoted four pages and the back cover to the upcoming release of Times Square. I tried and failed to get a professional translation of the article. Google Translate makes nearly as bad a hash of Thai as it does Japanese, but from what I can make out, this is a purely promotional article summarizing the plot, like the articles in Sonido No. 56 and Film Review Vol. 31 No. 2. 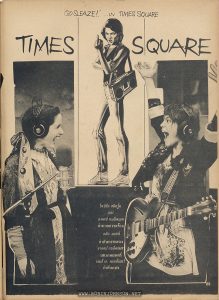 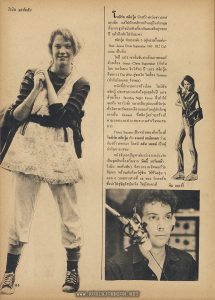 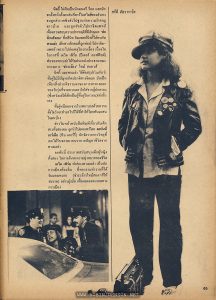 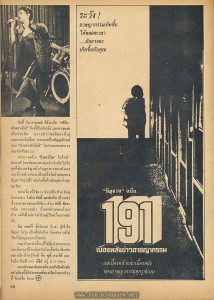 The caption and drawing on page 63, the first page of the article, are from the European movie poster, and the photo of Pammy and Nicky is TS-72-8A/14, the most-used photo of the girls together.

The image from the poster also appears on page 64, above UK Press Kit photo #4 of Tim Curry. The large photo of Robin, as far as I know, made its first appearance here. As she’s looking directly into the camera, I suspect it was taken at the same time as this pre-take shot, but since the background is cut out there’s just as good a chance it was taken at Pier 56.

The large image of Trini on page 65 looks to be from the same origin as that photo of Robin. Based on what I can make out of the lighting, I tend to think it’s from the outside location. It’s the only photo I’ve seen of Trini in that costume where she isn’t holding the boom box. The inset of the cops pushing Nicky into the back seat is another previously, and as far as I know, otherwise unpublished publicity still. The only matching shots in the film are from the opposite side of the car, and the film camera’s setup from this reverse angle is several feet to the left.

The shot of Robin as Nicky as Aggie Doone singing “Damn Dog” in the Cleo Club is yet another photo making its first appearance. But not its last… there’s a slightly better version yet to come.

So, amazingly, the Times Square publicity campaign was nearing its end, yet the places it was being published were being furnished with new material, despite it being highly unlikely that the local audiences would have seen any of the already-used photos. Unless, perhaps, the EMI/AFD publicity departments had decided that what they’d been doing was failing, and if they could only find the right photos, they could turn Times Square into a hit in the next country…

The back cover of Filmstar was a reproduction of the collage first published in Screen International No. 246 in June 1980 and used in February 1981 as the Australian movie poster, with the addition of Robin’s name in English. If there’s one thing all the local contemporary film publicity outlets agreed on, it’s that Robin herself was the most marketable aspect of the movie.

Posts mentioned above but not linked to: