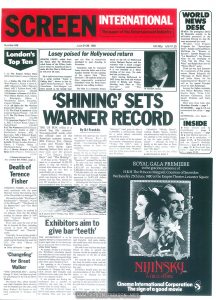 This is the fifth appearance Times Square made in the press that I know of. The first was a mention in Radio and Records, the date of which I’m uncertain, but since it describes the movie as coming out in the summer I’m placing it first — possibly even as early as November 1979 when shooting would have started and the big WJAD neon sign hoisted into place on the Candler Building. The second was Screen International No. 231 in March 1980, touting Robin’s unlikely “discovery.” The third was an article about the film’s production in The Aquarian in April 1980 which seems to have been written from interviews conducted in November and December 1979. And the fourth, in May 1980, a quote about the movie from Robert Stigwood in Photoplay.

So in mid-June 1980, which, judging by the Radio and Records article, was the originally planned release date for Times Square, EMI plastered a two-page announcement of the film’s impending release in the center spread of this organ aimed at British film exhibitors and producers. Allan Moyle had long since left the project; the spring months had probably been devoted to reshoots and re-editing. The text of the ad, which features a glorious photo of Robin by Mick Rock, places Times Square as the crowning jewel in Robert Stigwood’s crown. Seven months later it would be obvious to all that this was not the case, and the remaining publicity for Times Square would revert to the March Screen International blurb and center around Robin’s discovery and impending stellar career. 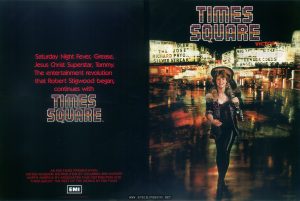 If you have the feeling you’ve seen this before, or that I’m just vamping here, you’re right: I only just obtained a copy of this magazine, but in December 2015 I posted a link to the copy previously posted by Karen Dean (DefeatedandGifted) and said pretty much all I had to say about it then. At the time I never thought I’d find any copies of Screen International, but I now have three issues in which Robin appears. I’ve been collecting Robin Johnson items for a very long time, and somehow “new” things keep turning up.