Times Square probably hadn’t had its January 15th opening yet when the February issue of Film Review came out. Unlike the article in the previous month’s issue, this isn’t a review at all, but a promotional summary of the film, with the exception of the backhanded compliment that most of the movie’s appeal is in the casting of Robin and Trini.

Times Square is a movie about youth. New York and rebellion — with a prominent soundtrack of New Wave music. Two girls, from totally opposite backgrounds, find themselves thrown together in the same private ward undergoing psychiatric tests. In spite of their initial incongruity, the girls find a common link in that they have both been misunderstood for most of their young lives. In retaliation they escape their remedial surroundings and disappear into the heart of the Big Apple.

Nicky Marotta, the stronger, older and more street-wise of the two girls, instils a rebelliousness into the weaker, 12-year-old Pamela Pearl, and together they form a united attack against everything Pamela’s father, and the bourgeois in general, stand for. Not before long the daring duo earn a certain infamy following a series of amusing and some rather more destructive pranks, including pilfering on the one hand and the levering of television sets off the top of New York apartment blocks on the other. With the assistance of a sympathetic DJ, the girls also gain air time and a wider notoriety, and are even allowed to sing their protest songs over the radio.

If it hadn’t been for the casting of 15-year-old newcomer Robin Johnson as Nicky and Trini Alvarado (who played the lead in Robert Altman’s Rich Kids) as Pamela, the film might well have lost a lot of the appeal it has. Tim Curry completes the billing as the DJ up against more than he can handle, with Peter Coffield as Pamela’s short-sighted father.

Times Square is an EMI release and was directed by Alan Moyle, with songs by The Pretenders, Lou Reed, Suzi Quatro, Robin Johnson, and many others.

Times Square can also lay claim to being the first major release to present a look at New Wave music.

Tim Curry’s photo is UK Press Kit photo #4, which had been previously published in Mediascene Prevue Vol. 2 No. 2, Sept.-Oct. 1980, and The Aquarian, April 23-April 30 1980. Robin’s is TS-57-26/1 from the US Press Material folder, which was used for both the soundtrack album cover and the North American movie posters, and published, oh, lots of places previously. Seriously, I’m sure I’ve already listed them somewhere. Maybe next time it turns up I’ll do another reassessment, but not today. 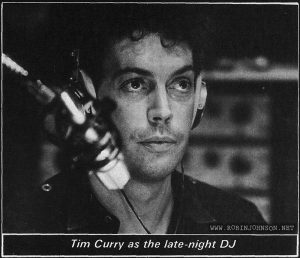 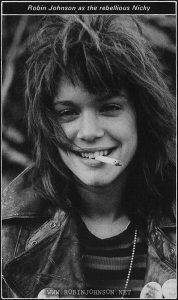 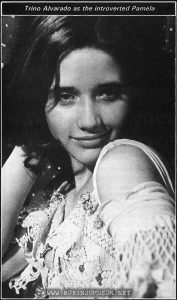 The unusually sultry photo of Trini, however, hasn’t appeared anywhere else, as far as I know.

Why did I say earlier that the movie hadn’t opened yet? Because there was an ad announcing its opening on page 10.

This is the exact same ad I posted on December 7, 2016. Yes, we now know that someone cut up a copy of this magazine and sold the pieces, and yep, I bought one. It’s a shame that these artifacts tend to be worth more sold by the half-page, but here we are.

(Yeah, this post should have gone up over a year ago, probably between Films Illustrated, Vol. 10 No. 113 and Movie 81 No. 2. I had everything ready to go, and somehow accidentally passed over it. Well, here it is now.)

The previous posts mentioned above (except for the many soundtrack and poster variants):