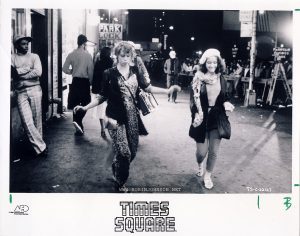 I’m going to have to temporarily abandon my mostly chronological posting order, because I’ve recently obtained a few items that If I’d had them previously, they’d have already gone up.

Although, in all honesty, I don’t know where this would go. It’s a publicity still from AFD, in the fashion of the items from the US Press Material folder, but it has a copyright year of 1981. AFD was the company EMI and ITC had created to release films in the US, and it was in dire financial straits at the time and Times Square wasn’t helping. Times Square was long gone from US theaters by 1981, so there should have been no need to produce more publicity materials. Of the stills released in the UK, some are credited to ITC, some from Columbia-EMI-Warner, and the ones in the UK press kit had no information on them but the kit itself was credited to EMI. Why did AFD print this up in 1981? But since it’s American, I feel that chronologically it should have come before the items produced in the UK.

My copy here has crop marks; someone intended in cutting off the very bottom and an inch off the right to make it fit, but what they were making it fit into, I have no idea. There’s probably a magazine or newspaper out there with this photo, cropped like that, in it. If that should turn up, it might give us an idea of why, when, and where this was made.

If this looks familiar, it’s because I’ve posted a color version twice previously, which was originally scanned and posted by Cineplex; I don’t actually have a physical copy, but if you’ve been following me here you know it’s one of the images I believe to have originally been UK lobby cards.

Karen (DefeatedandGifted) has this photo without the crop marks, along with four more AFD stills from 1981. Up till now I was assuming that they were produced for the Australian market, but Times Square was released in Australia by EMI-ITC, so why AFD made any publicity materials at all in 1981 is still a mystery.