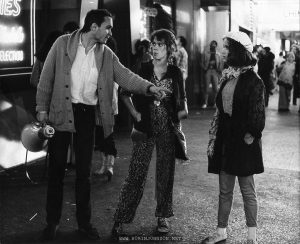 Way back in October 2014, I posted a photo of Robin and Trini getting ready to shoot a scene that was later cut from the film, and complained that although the vast majority of Times Square publicity stills don’t actually come from shots of takes used in the film, there was a dearth of genuine behind-the-scenes images. 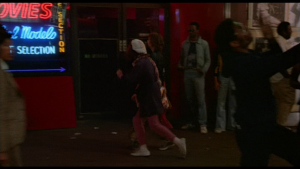 Well, that dearth is slightly less dearthy now. Here’s Allan Moyle directing the girls on 42nd Street. Judging from the neon sign at the left, it’s just as they duck into and get kicked out of the adult novelties shop. That shot was made from the street, not the sidewalk, so the movie camera is likely directly to our right.

Handwritten on the back is “45/35”. I have no idea what that might mean, or when it was written.

And that’s about all I have to say about this, despite the fact that it’s one of the things I’ve been most excited to find. Except maybe to note that Moyle seems to be wearing the same sweater we saw half of in the other photo. I’m sure, though, that quite a few comments will be inspired by the expressions on Robin and Trini’s faces.