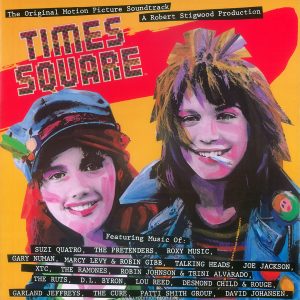 This was the very first item of Times Square memorabilia I ever got (although, like the double-sided poster, not this specific copy of it). I saw the film twice at the Quakerbridge Mall, which had two record stores in it (later there were three, if you can imagine such a thing!). The one on the first floor had a more middle-of-the-road selection, as well as stereo equipment and a selection of cheap guitars in the back. The one upstairs was part head shop and had a dedicated punk/New Wave section. It was where I bought my first copy of the soundtrack to Times Square, and in late 1980 it had these copies of the album cover stapled to the walls all over.

Either after the second time I saw the film, or sometime shortly after that, when the film was gone but the soundtrack was still selling, I asked about these items, what would happen to them when they came down, when they were going to come down, how much would it cost to reserve one so I could buy it when it did come down, and made such a pest of myself that whoever I was bugging just took one down and gave it to me. (Of course, I was probably carrying an armful of records to buy, so it was more of a customer reward than a brush-off.)

It immediately went up on my bedroom wall and stayed there until we moved (more or less). It had staple holes on its corners which I probably made worse with push pins. I must still have it, but I don’t know offhand where it is.

Sometime in the last 15 years, much like happened with the double-sided posters, someone on eBay sold me a pile of these in uncirculated condition. The seller called them “slicks,” but they aren’t really — a slick is technically an album cover printed on thin paper to be pasted onto a cardboard album sleeve, and this is the front of the album cover printed on thin cardboard. I tend to refer to this thing as a slick, though, so if I ever mention a Times Square promo slick, this is what I’m talking about. (If I’m wrong and “slick” is the appropriate word for all promotional album cover art, let me know.)

RSO took the movie poster art design — the collage of the photos of Trini and Robin with Robin’s right shoulder erased — and made it a watercolor painting. The logo is aligned with itself, and the text is typewriter lettering against strips of black. If you’re familiar with the American edition of the soundtrack album, you may have noticed the one big difference here: no Tim Curry. The button with the image of Johnny — floating in space on the double-sided poster, affixed to Nicky’s lapel on the movie poster — is here nowhere to be seen.

The most significant change though, as far as I’m concerned: Robin’s eyes are now green, as they should be, and not blue. Trini’s are now brown.