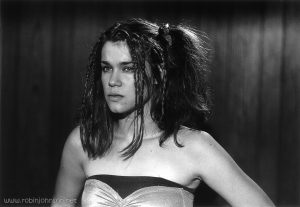 And the story continues… Allan Moyle wanted “real” girls, not professional actresses, to portray Nicky and Pammy, and searched high and low, even holding nation-wide open auditions, with no luck. Trini Alvarado was hired for Pammy on the strength of her performance in Rich Kids (1979), but Nicky eluded them.

Until, one day, an unidentified casting scout happened to spot Robin as she was cutting class and having a smoke on the steps of Brooklyn Tech. He gave her a card with the audition information and encouraged her to go as she would be perfect for the role. She put the card in her pocket and promptly forgot about it. Several days later, she found the card again, and thinking it might at least be a laugh, went to an audition. She didn’t get cast there on the spot, but she might as well have been; despite having no previous acting experience, she was perfect for the role, exactly what Moyle was looking for.

This picture, though… I’m not sure what look they thought they were going for, but thank god they didn’t stick with this. I think it’s a runaway-hippie-girl look that’s more evidence that the film originally had a late ’60s-early ’70s aesthetic. Although there’s a trace of this look remaining in Nicky’s tiny braids during the dancing-down-42nd-Street sequence, someone finally realized that Nicky would never spend that much time fussing with her hair.

Even Robin doesn’t look too happy about this look.