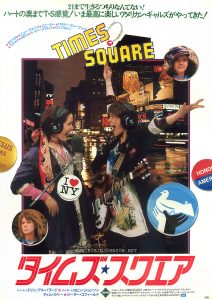 Times Square opened in Japan on June 20, 1981. I don’t know if Robin and her mom made it there on their promotional tour. I do know that the Japanese publicity for the movie relied heavily on it being a hip young American movie, and illustrated that fact in a way that doesn’t translate back particularly well.

I’m speaking of the Nicky’s-jacket inspired buttons floating across the poster. Using buttons as a major design element is actually a good idea, and was in fact used on the very first Times Square poster. The buttons there, however, were of Johnny LaGuardia and two quotations from the movie. Here, the “Nicky” and “Pammie” (sic) ones make sense, but the “I ♥ NY” is unintentionally ironic; the black and white hands holding a dove and “Jesus was a dropout” are both about ten years out of date and celebrate a hippie culture absent from the film (although present in the screenplay); and “Honor America” is entirely out of place.

The main photo is the one that had been used on the inside of the AFD press folder, on the picture sleeve of the Japanese “Same Old Scene” single, and also appeared in the gatefold of the soundtrack album and in the songbook. It had also been published in Movie 81 No. 2 in February 1981, and I suspect it’s also a UK lobby card that hasn’t surfaced yet. The background appears to be a stock photo of Times Square, looking north along Broadway past Bond International Casino towards Castro Convertibles.

The image on the “Nicky” button is one of the Yoram Kahana photos that I believe were shot during the excised Hudson River sequence, which also produced the iconic shot of Nicky used on the soundtrack album cover and the US and Canadian movie posters. This shot had previously also seen publication in Movie 81 No. 2, and will later turn up on a German lobby card. “Pammie” is a detail from one of many publicity stills shot during the excised “looking for Nicky’s father” sequence, which had been a UK lobby card.

I would translate the Japanese text, but my OCR program doesn’t do a good job identifying the characters, especially when they’re not perfectly aligned, and Google Translate still tends to make a hash of the Japanese language. And, I can’t afford to hire a professional translator. So we’ll just have to sit and be mystified at the single word in English among the bullet points at the top: SEX.