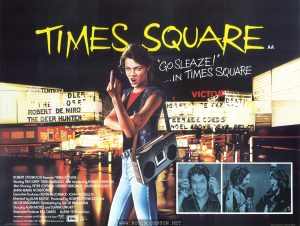 A standard one-sheet movie poster is 40 inches high by 27 inches wide. A “quad” poster, which I don’t think they make anymore, is 40 inches wide by 30 inches high. EMI took this extra space and zoomed in on the top two-thirds of the painting, cutting it off just above the artist’s signature.

Overall it’s a more pleasing layout, with the credits in the lower left corner over the wet street, and the two inset photos next to each other in the lower right. The photo of Tim Curry has been changed to TS-66-28/8 from the US press kit and AFD Campaign Pressbook, and the photo of Pammy and Nicky is TS-72-8A/14, also from the US press kit and the Campaign Pressbook. Neither of these photos were in the UK Press Kit (at least not in my copy). Perhaps this poster was put together first, and when the one-sheet was designed the American stills were replaced with British ones.

This was the layout used for the newspaper and magazine theater advertisements for the movie’s run.