On June 1, 2016, Mick Rock did a signing for the “unlimited” edition of his book, The Rise of David Bowie, at Taschen in New York City, and I went.

Of course I got an autographed book, but I also took the opportunity to ask him about the photos of Robin I’ve been theorizing he took at the same time as the back cover of the soundtrack album. 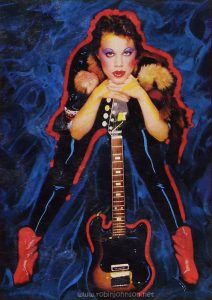 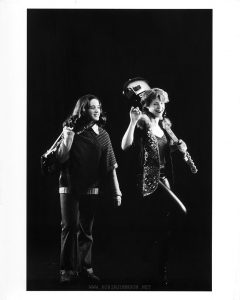 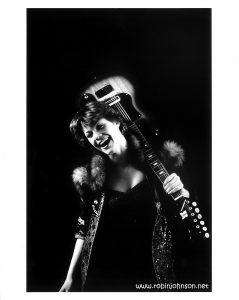 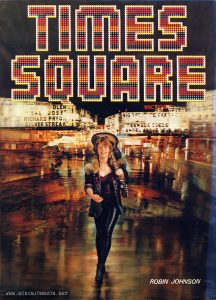 I showed him a page with the four photos printed on it, and there ensued a conversation that went more or less like this:

Q: Could I ask you a quick question?

Q: I know you took the first photo here. Did you take the other three as well? I know this is yours.

A: How do you know that? But it is mine.

Q: Because on the back of the album, it says, “Photo by Mick Rock.”

A: Oh, yeah, yeah, not many people now even know about the film Times Square.

Q: Did you take these others?

Q: Because these are the only ones where she’s got that guitar. And it is —

A: I could have… no, I shot them both together. That was a long time ago… They paid me a lot of money…

SECOND ASSISTANT: Take the credit for it!

Q: Thank you very much.

So I guess we still don’t have a definitive answer, and won’t unless someone else manages to get one from him, or he finds and releases the originals from his archive. But he certainly seemed to be leaning in that direction, and so I feel more certain than ever that these shots, and any more that might possibly turn up, of Robin in her “Aggie Doon’s debut” outfit, and with that Kent guitar, and any shots that may surface of Trini in the poncho she wears during the final sequence that aren’t obviously shot during filming, were all shot by Mick Rock in a session that yielded the back cover of the soundtrack album, and for which he was paid a lot of money.

The cover is a 2D hologram containing at least five distinct photographs and so is bloody difficult to get a decent snapshot of.

The reason I went. 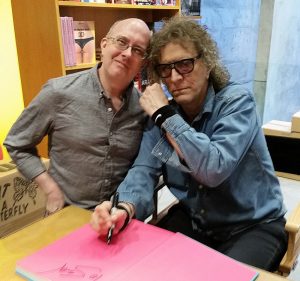 Your humble narrator with the man himself. If he had taken the photo, I might have looked cool too.