The Mystery of the Double-Sided Poster, Side Two 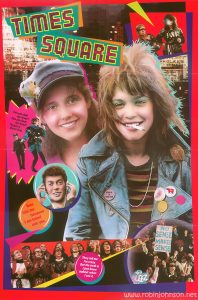 Fully opening the two-sided poster reveals my favorite version of the image most associated with Times Square.

As I mentioned last time, I find the red background more visually pleasing than the yellow used on the movie poster and soundtrack album cover. There are several other differences in this version, as well. The Seiniger designers have collaged the black and white photos of Robin and Trini, but here they’re of equal height; the future versions will make Trini seem significantly shorter than Robin. Also, this is the only time we get to see Robin’s right shoulder; the movie poster and album cover cut her out at the lapel.

This side doesn’t use the DYMO label-style typeface, but it does use Nicky’s pins as a design element, floating quotes from the film and Tim Curry’s image in badges. The Tim Curry button will later find its way to Nicky’s left lapel, which for now plays host to a button with the RSO cow. The buttons-scattered-across-the-poster idea will later be used by the Japanese promotion artists, although their choices of what constitute statements of rebellion will face a bit of a language barrier.

The artists do a masterful job of colorizing the black and white photographs, but either they had no color reference photos or they made an artistic decision for reasons of their own, because they made Robin’s eyes blue. Robin’s eyes are green with a trace of brown. Trini’s eyes here are pretty much the color of Robin’s eyes in real life. I don’t know what color Trini’s eyes really are.

There are color photos that were taken at the same time as the black and white shot of Nicky so I also don’t know why they felt the need to slather eye shadow on Nicky that she certainly wasn’t wearing. I’ve never once had the feeling that Nicky was an eye shadow kind of girl. The closest thing we ever see to her applying make-up is to paint a mask across the entire top half of her face. Even though the poster designers had finally gotten a very good handle on what the film was trying to get across, they didn’t quite understand the character of Nicky. It’s another attempt to make her just a little more girly, like the Press Folder’s misspelling her name as “Nikki.”