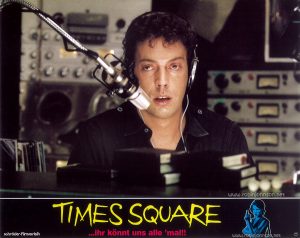 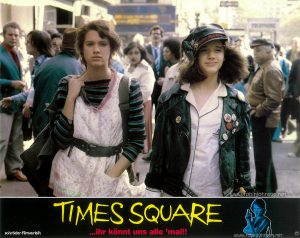 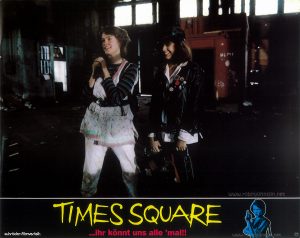 The shot of Johnny at the mic was previously a British lobby card, and had been published in Movie 81 No. 2 in February 1981. It would appear to have been taken at the same time as the shot that appeared in the center of the gatefold of the soundtrack album (except in the UK), and the earliest published photo of Tim Curry from Times Square (in The Aquarian, April 23, 1980), which was also #4 of the seemingly unending series of UK black and white publicity stills.

It’s also the card that was missing from the second set of these cards I found, replaced by a card not in the first set.

This shot of the girls walking west along 42nd Street towards Times Square, with 6th Avenue behind them, was used in 1981 as a British lobby card. It also appeared in Belgium’s Joepie No. 365, on the Japanese movie poster (Pammy’s face only), and in the first promotional piece sent out by RSO.

And a cropped version of this photo of Nicky and Pammy entering the Pier 56 hideout previously appeared in the Japanese souvenir program book.