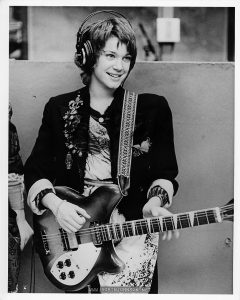 6/7/8. 15-year-old screen newcomer ROBIN JOHNSON stars as Nicky Marotta, a street-wise young runaway who, thanks to a radio DJ’s patronage, is able to fulfil her fantasies of becoming a star of the “new wave”.

This, I believe, is one of the photos missing from my copy of the UK Press Kit. The photo caption sheet in the press kit lists photos 6, 7, and 8 as pictures of Robin all with the same caption, and my copy only has a 7 and 8. This photo has a tiny “6” inset on the front, and the back has the same black “TIMES SQUARE” stamp as the Press Kit photos. Add in the fact that this came from a memorabilia dealer in England, and I’m satisfied that it was originally part of the Press Kit package.

It’s the same image as TS-69-34A/4 from the US Press Material folder, printed with higher contrast and thus losing some detail, but cropped differently so it shows a little more of the area around Robin. We can now see Trini’s arm, the bottom of the guitar, and not quite enough more of the headstock to be sure whether this was before or after the “Rickenbacker” nameplate was removed. The same image was also used by ITC to promote the film, that one being cropped even closer.