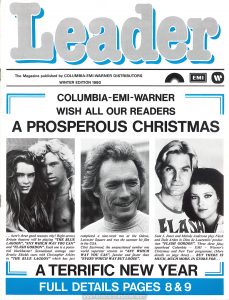 Leader was a vehicle by which Columbia-EMI-Warner film distributors promoted all their new films to UK theater owners. As Times Square was set to open in mid-January, it had a few mentions and an advertisement in the Winter edition, although it looks like the distributors were betting their big money on Flash Gordon, which had already had its premiere. 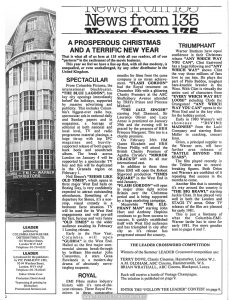 EMI Films makes industry history with it’s turn-of-the-year-releases. Three Royal Premieres in three consecutive months for films from the same company is no mean achievement. “FLASH GORDON” had the Royal treatment on December 10th with a glittering Charity Premiere at the ABC Shaftesbury Avenue attended by TRH’s Prince and Princess Michael.

“THE JAZZ SINGER” starring Neil Diamond, Sir Laurence Olivier and Lucy Arnaz is premiered on January 29th and the evening will be graced by the presence of HRH Princess Margaret. This too is a charity premiere.

In addition to these three films EMI will open the Robert Stigwood production “TIMES SQUARE” in the West End in mid-January.

“FLASH GORDON” will open in major cities right across Britain over the Christmas period and is being supported by a huge marketing campaign.

Times Square was apparently the only winter 1980-81 EMI premiere not to get the royal treatment. 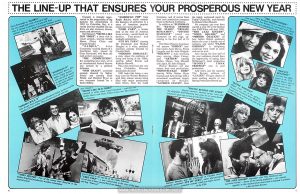 The center spread publicized all the films of the season, and again mentioned Times Square along with the the other three EMI films while giving a special shout-out to Flash Gordon. 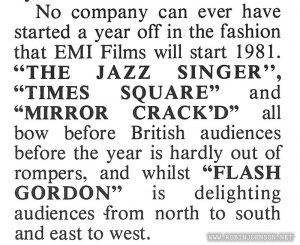 No company can ever have started a year off in the fashion that EMI Films will start 1981. “THE JAZZ SINGER”, “TIMES SQUARE” and “MIRROR CRACK’D” all bow before British audiences before the year is hardly out of rompers, and whilst “FLASH GORDON” is delighting audiences from north to south and east to west. 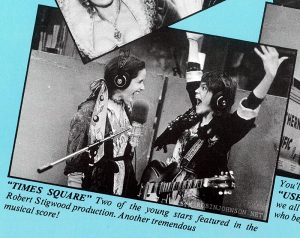 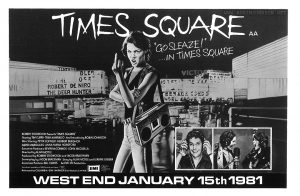 Finally, on page 10, was a half-page ad. After all the work that went into the logo on the cover of the UK Press Kit, it was tossed aside in favor of what you see here. Nearly all the UK advertising materials used this logo and the painted image of a frighteningly skinny Nicky. I’ll gripe more about that when I get to the movie poster.