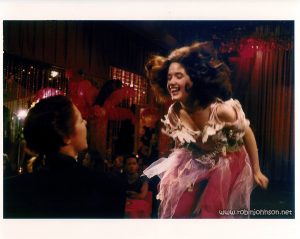 12-year-old Trini Alvarado enacts 13-year-old Pamela Pearl making her debut as an exotic dancer, thankfully not topless. There are other images of this scene that were taken at the same time and differ only slightly, but I only have them published in magazines, on lobby cards, or in promotional packages. This one is an unmarked 8 X 10 like the last few and next few photos. All the promotional shots of this scene have in common is, again, that they’re not the shot as it appears in the film.

This is the closest image from the film. (I hope I’m not boring you with this.)

It’s possible that the stills were shot while the movie camera was taking this reverse angle.

The screenplay is adamant that Pammy dances topless, and has her appear topless in a few other short scenes before and after. I think everybody is glad that Trini and her parents refused to let her do it. The change was probably a very late one, but even though it never fails to get a laugh when Roberto hires her anyway because “I like that. Class. Respect. That’s good for the club. Good for business,” it’s also the point where the film takes its deepest plunge into the dream-logic that permeates it, making it so emotionally affecting in ways that defy rational analysis. After all, no sense makes sense.

Or, it’s left over from another theme in the screenplay that’s almost gone from the finished film, in which it’s shown that there’s an underground community in Times Square that knows Nicky and is looking out for the runaways behind the scenes, like a surrogate family. Roberto is determined to hire Pammy no matter what, in order to help her and Nicky, and needs to come up with an excuse that will fool a desperate 13-year-old girl. This still ignores the potential legal jeopardy he’s putting himself into, so… we’re back in dream-world again.

Whatever you think of the film’s rationalization for Pammy stripping without taking off her clothes, in the long run at the very least it’s kept the movie from potentially becoming illegal to own or view in the United States. So I’m happy with it.

It also helps keep the film from devolving into just another exploitation flick. I personally believe that most (not all, but most) of the material that was cut from the film, that everyone is so sad about, would actually weaken the film were we to see it presented explicitly.

There’s a much richer and wittier look at the situation at DefeatedandGifted’s Times Square Fandom blog.

One Response to “Foxy Miss Pearl”