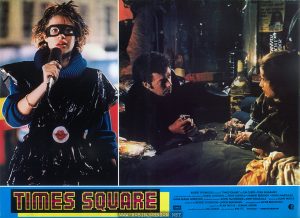 This is exactly what the post title says: a second lobby poster from Italy. There may be more, but so far I’ve only come across two.

The text is exactly the same as the other one and the Italian movie poster. Robin as Nicky is on the left, in a photo taken during the shooting of the final sequence, which is I believe making its first published appearance on this poster. We’ll be seeing it a few more times; it’s possible those future items actually came out before this, but they’re all from the spring or summer of 1981.

And on the right, we see an adult man giving vodka to a thirteen-year-old-girl, but it’s okay: he’s not interested in her, he wants to know about her sixteen-year-old roommate. Um… yeah. Sure, there’s really both more and less going on in that scene than that implies, but, I think you’d have a pretty hard time getting that from script to screen nowadays.