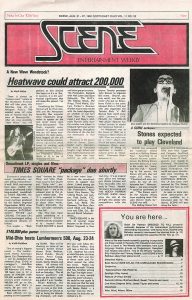 Even the culturally barren industrial wasteland of Northeast Ohio was receiving word of the impending great event. I’m kidding, of course; Cleveland, Akron, Youngstown… this area birthed Pere Ubu, the Dead Boys, and Devo, so it seems right that not only did the August 21 1980 Scene make the release of Times Square in two months front-page news, but it gave the story a title that seems a bit cynically bored with the obvious commercialism. The focus is already on pitching the music before the film. In fact, the movie seems to be an afterthought — this article is promoting a media assault on all fronts by the Robert Stigwood Organization, not a neat little film by Allan Moyle.

This may be the only pre-release article that describes the soundtrack by only listing artists who are actually on it, with no mention of Tom Petty or David Bowie. I wonder if it’s possible this was written after the soundtrack had been completely finished, but published before… well, there’s at least one more article that promotes Tom Petty. This article also calls the soundtrack “long-awaited” — was there that much pre-release buzz about the music? I’d be very interested to see mentions of it before this in the music press.

Sadly, although Times Square was front-page news, it didn’t rate a photograph. 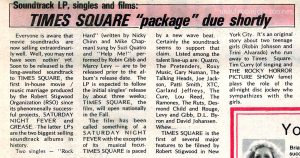 So, I’ll stretch this post by including the text of the article:

Everyone is aware that movie soundtracks are now selling extraordinarily well. Well, you may not have seen nothin’ yet. Soon to be released is the long-awaited soundtrack to TIMES SQUARE, the first in-house movie / music marriage produced by the Robert Stigwood Organization (RSO) since its phenomenally successful projects, SATURDAY NIGHT FEVER and GREASE. The latter LPs are the two biggest selling soundtrack albums in history.

Two singles — “Rock Hard” (written by Nicky Chinn and Mike Chapman) sung by Suzi Quatro and “Help Me!” performed by Robin Gibb and Marcy Levy — are to be released prior to the album’s release date. The LP is expected to follow the initial singles’ release by about three weeks; TIMES SQUARE, the film, will open nationally in the Fall.

The film has been called something of a SATURDAY NIGHT FEVER with the exception of its musical focus. TIMES SQUARE is paced by a new wave beat. Certainly the soundtrack seems to support that claim. Listed among the talent line-up are: Quatro, The Pretenders, Roxy Music, Gary Numan, The Talking Heads, Joe Jackson, Patti Smith, XTC, Garland Jeffreys, The Cure, Lou Reed, The Ramones, The Ruts, Desmond Child and Rouge, Levy and Gibb, D.L. Byron and David Johansen. Whew…

TIMES SQUARE is the first of several major features to be filmed by Robert Stigwood in New York City. It’s an original story about two teenage girls (Robin Johnson and Trini Alvarado) who run away to Times Square. Tim Curry (of singing and THE ROCKY HORROR PICTURE SHOW fame) plays the role of the all-night disc jockey who sympathizes with the girls.