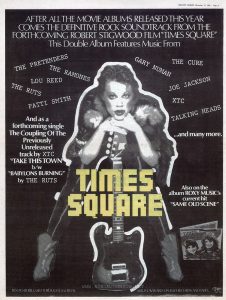 Even as Times Square was opening and closing in the United States, the mighty RSO promotion machine was hard at work in the United Kingdom, as this full-page ad for the soundtrack shows. Running on page 21 of the November 15 Melody Maker, it featured a newsprint-style blowup of Mick Rock’s photo of Robin from the back of the album. Although it teased the impending release of the movie, it didn’t give a date for it. (The UK opening would be January 15, 1981; perhaps that date hadn’t been decided on yet. Or, maybe the movie marketing people and the record marketing people weren’t on speaking terms.)