If it hadn’t been for him, Jacob Brackman and Allan Moyle would have likely continued to develop the screenplay for Times Square for another year or two. The result would have been a more coherent story, somewhat darker in tone, with more overt indicators of Nicky and Pammy’s relationship, and a soundtrack that only filled a single LP.

That soundtrack, however, wouldn’t have included many New Wave songs, if any.

And the film, being made two or more years later (if at all), wouldn’t have starred Robin Johnson, who would probably have been in college studying pre-law or something by then.

It was a cynical move to load up the movie with New Wave music in order to sell records to a newly burgeoning market… and Robin’s casting was more than anything a case of right place-right time… but without those two things, Times Square would have been a very different film. Would it have been a better film? Quite possibly… but it wouldn’t be the film we’re still obsessed with and talking about all these years later. Maybe someone might be, but not you and me.

And yeah… Robert Stigwood is the guy who dealt Robin’s career a blow it never fully recovered from: signing her to a three-picture deal and then never making the other other two movies, while refusing to let her out of the contract and keeping her from working as an actress until two years had passed and nobody remembered her name…

… but he did make the movie without which we would never have seen her at all.

So, thank you, Robert Stigwood. Rest in peace. 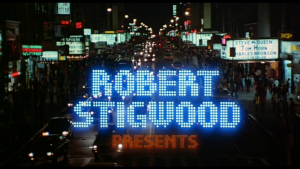