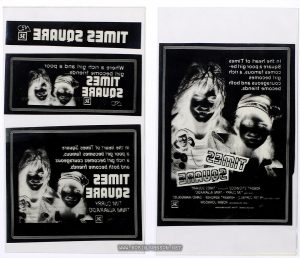 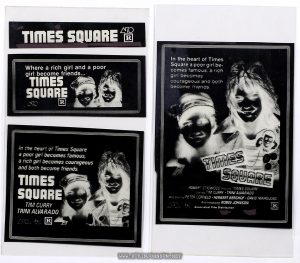 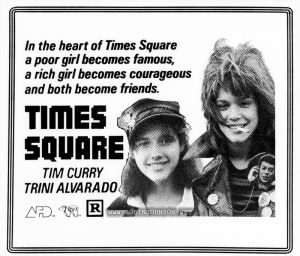 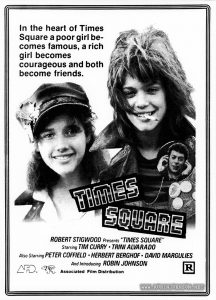 No pictures this time. Sorry. I’ll make it up to you eventually.

Gene Siskel reviewed Times Square on page 6 of Section 3 of the November 19 Chicago Tribune. He gave it two stars, and those two stars were Robin Johnson and Trini Alvarado. No, he didn’t literally say that, but his review was typical of the reviews at the time: the film was unrealistic and disjointed, a rehash of the typical rebellious youth picture made dangerous by portraying Times Square as a safe place for kids, but was somewhat redeemed by the terrific performances of Robin and Trini.

I don’t have a physical copy of this review, but I thought it was important enough to include. The online Tribune archives contain a scanned copy. Here’s the text, which will maybe be a little easier to read, until someone makes me take it down:

“TlMES SQUARE” is a standard teen age rebellion movie set to a New Wave beat. The film’s parents are awful; the deejay is the only one who understands.

“Times Square” is the story of two young girls, one wealthy and WASP-ish, the other poor and Italian. They find each other in the same New York neurological hospital, where they both — rather improbably — are undergoing tests for brain damage.

The poor girl, who dresses very punk, is a ward of the state; the wealthy girl, whose father is a city planning comissioner out to purge Times Square of its criminal element, is a sweet little thing who dresses demurely.

Why is the rich girl being tested for brain damage? The only reason the film supplies is that she embarrassed her father at a public meeting at which his Times Square plan was being discussed. Since when does a parent respond to whining by having a child subjected to a CAT scan? When the whining occurs in a movie designed to appeal to youngsters.

BUT THAT ISN’T the biggest lie of “Times Square,” which producer Robert Stlgwood has envisioned as the punk-rock answer to his ‘“Saturday Night Fever.”

No, the biggest lie is that these two girls successfully run out of their hospital room, drive across Manhattan in a stolen ambulance, and establish living quarters in a deserted pier. By day and night they wander New York’s fabled 42d Street, between 7th and 8th avenues, a street that in reality is packed with grubby movie theaters, pimps, prostitutes, and junkies. They write plaintive, punk songs about the trials of adolescence and stage a culture protest by throwing TV sets from the roofs of buildings. Calling themselves the Sleeze Sisters, their anti-authority attitude is exploited by a New York disk jockey (Tim Curry, better known as Dr. Frank N. Furter in the cult hit “The Rocky Horror Picture Show”).

In reality, such waifs most likely would not survive 42d Street, and no doubt parents of children who see this movie will be alarmed at its message, which is nothing less than, “Leave home and come to New York.”

OF COURSE, it’s precisely that kind of message that has sold youth movies, and “Times Square” is no different. It’s just that as city violence has escalated, it’s tougher to ignore the reality of the situation.

Having said all that, there are some things to admire in “Times Square.” Both young actresses (Trini Alvarado as the rich girl, and Robin Johnson as the punk) are excellent in portraying two sides of youthful rebellion. They only look silly when the script requires them to be.

And there’s a special moment when they sing together in the deejay’s studio a virulent, anti-adult rock number. The language of the song is as foul as can be, and the righteous energy of youth is displayed with intimidating power. To see that one scene in “Times Square” is to see a classic rite of passage.

“Times Square” may catch on with today’s young people; and if it does, they won’t be seeing anything that their parents haven’t seen and applauded in their own youth. The punk attitude is not new; only its clothes and 4- and 10-letter words are fresh. Rating: 2 stars.

Two days before that, Roger Ebert reviewed Times Square for the Chicago Sun-Times. He also gave it two stars for essentially the same reasons, but begrudgingly liked it even more than had Siskel: “Of all the bad movies I’ve seen recently, this is the one that projects the real sense of a missed opportunity-of potential achievement gone wrong,” he said. “Why did I still keep thinking it had promise? Mostly because of the screen presences of the two young actresses who were able to suggest more about their characters than the screenplay provides. … ‘Times Square’ is filled with ideas for a movie, but they’ve just never been organized into a movie.”

He’s right, of course: Times Square is an uncomfortable mash-up of two different movies, Allan Moyle’s runaway girls and Robert Stigwood’s New Wave rebellion. The rushed, forced melding of the latter with the former (with Robin as the secret ingredient) created magic, but in the form of a fatally flawed film.

Ebert’s review is online in its entirety on his website.

This was in the local paper Sunday, October 19, and since I wouldn’t have clipped it before I’d seen the movie, Kurt and I must have seen it either opening night or Saturday. I remember we’d been looking forward to the New Tim Curry movie, and I guess now we’d been REALLY looking forward to it. There aren’t times listed for Friday or Saturday so I can’t be certain what showing it was, but I seem to recall wandering around the record stores in the mall after while waiting for whichever of our parents was coming to pick us up, so the 6:30 is a good bet.

I also saw it once again on my own after that, and made another round of the record stores, but I don’t remember what day that might have been. I do know that, though I may have gone the first time for Tim, I went back for Robin.

The Quaker Bridge 4 was the only area theater it was in. I think it ran for two weeks.