Here, in the December issue of Andy Warhol’s Interview magazine, is Robin getting her fifteen minutes. A gorgeous glamor photo by photographer Peter Strongwater, and a stunningly non-realistic description of Times Square’s success… Robin was truly the toast of New York, for at least as long as it took to read the text on page 15:

A native New York skeptic, ROBIN JOHNSON thought she was being handed another line when a talent scout for ROBERT STIGWOOD’s TIMES SQUARE approached her on the steps of Brooklyn Technological High School and said, “Hey kid, ya wanna be in pictures?” Winning the role away from hundreds of professionals, Robin was instantly immersed in twelve weeks of movie star training—all singing, all dancing, all talking. Now, Robin and co-stars TIM CURRY and TRINI ALVARADO have hit it big as TIMES SQUARE draws rave reviews and long lines. … Photograph by PETER STRONGWATER. . . .Hair by STEPHANE LEMPIRE. . Makeup by MARIA MACHEDA.. . Clothes by MARIO VALENTINO. . . Earring by ROBERT LEE MORRIS/ARTWEAR. . . . Cuff by TED MUEHLING/ART- WEAR.. . Styling by GALE SMITH

And, that’s all I have to say about this. The photo speaks for itself. Despite Times Square’s failure, she would have been one of the biggest stars of the 1980s had Robert Stigwood not put the brakes on her career just as it was getting started. Whether that would have been a good or bad thing for her, well, who’s to say, but it would have been terrific for Us Her Fans. But, I’m getting ahead of myself… Times Square has only just opened, and she still has a publicity tour to do.

“The raggle-taggle queen of the night is Robin…”

Bruce Williamson didn’t not like Times Square, but he couldn’t ignore its flaws… still, his review in the January Playboy was generally positive, appreciating the film’s visual evocation of Times Square and, like most other reviewers, Robin’s performance.

The two bunny-heads meant the movie was “worth a look.”

A gravel-voiced hoyden named Robin Johnson takes over Times Square (EMI/ AFD) and makes it all her own.

Teamed up with Robin is Trini Alvarado (who made her big splash in last year’s Rich Kids), while England’s Tim Curry (star of The Rocky Horror Show on stage and screen) adds a garnish of colorful idiosyncrasy as an all-night deejay who transforms a couple of runaway kids into punk-rock stars. Directed by Canadian- born Alan Moyle from a screenplay by Jacob Brackman (former Esquire film critic and sometime PLAYBOY contributor), Times Square takes chances, caroms from hits to misses, yet captures the seedy, funky atmosphere of mid- Manhattan fleshpots as few other movies have done since Midnight Cowboy. Filmed on location, Moyle’s grungy fable depicts a nighttime New York full of music, drugs, muscle, hustle, youthful exuberance and teenaged rebels without a cause. The raggle-taggle queen of the night is Robin, herself in real life a Brooklyn high school girl and nonpro until someone discovered she could curse, swagger and belt songs like a junior-miss Bette Midler—though compared with this kid, Bette is a cream puff. Here, Robin’s the street-wise gamine who takes up with a New York City commissioner’s runaway daughter (Trini) to form a duo called The Sleaze Sisters. The movie as a whole may be a triumph of sleaze over substance, but Robin Johnson plays it like a seasoned trouper.

The photo looks like the one that was used as the cover of the Japanese “Same Old Scene” single, on the inside of the soundtrack album gatefold, and in the songbook, but it isn’t. It also isn’t a color version of TS-72-8A/14, which appeared in the December 23, 1980 US magazine (as seen last post). It’s a third shot from that session, which as of this writing I don’t believe ever appeared anywhere else.

Update, 4 February 2018: The photo accompanying the Playboy review of Times Square is TS-C-34/29, one of a series of black and white press photos issued by AFD, and carrying a copyright date of 1981. I have one of those photos, but not this one; luckily they’re all in the collection of Karen Dean (Defeatedandgifted), and it’s on display on her blog. 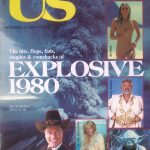 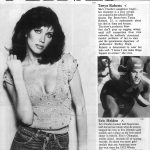 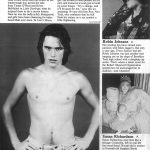