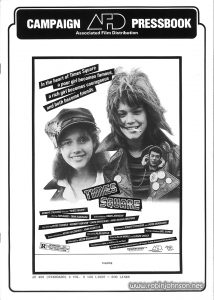 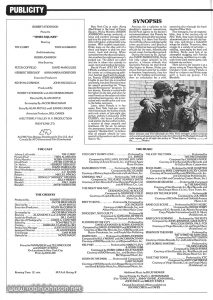 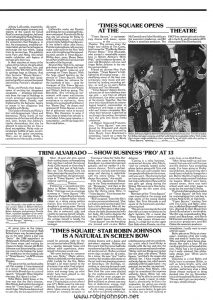 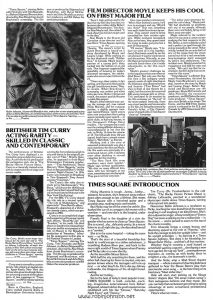 Insert cards aren’t made anymore, but they were my favorite form of movie poster, because the three windows in my bedroom way back when were spaced perfectly to fit two insert cards between. Also, the heavier card stock made them more durable when taking them down and putting them up.

As I recall, these were generally displayed in a theater’s lobby in a window labelled “Coming Soon.” The Times Square insert card is the same basic design as the full poster, with the elements rearranged slightly to fit the narrower format. The blotch of red paint in the background is larger, and Robin has been rotated to the left, although Trini and Tim maintain their orientation. The button with Tim on it has moved off Robin’s lapel up to her neckline, to keep it on the poster. The right point of Robin’s jacket’s collar has been redrawn now that it no longer would cover Trini’s face. The seam along its bottom edge disappears at the point where it was cut off for the one-sheet poster art, and the seam along the top (which was painted out on the one-sheet) isn’t there at all. The collar may even be a little longer and pointier than it was originally.

The credits are the same, except for the addition of a “Dolby Stereo in Selected Theatres,” and Allan Moyle’s name spelled correctly with two L’s in his story credit. His director’s credit maintains the “Alan” spelling. Why his name is spelled two different ways on this poster is as much a mystery to me as why it’s misspelled “Alan” on everything else connected with Times Square, including the film itself.