This was almost certainly aimed at theatergoers and not the press, but I can’t be 100% certain, since as I’ve noted before, Google Translate makes a total hash of Japanese, and I don’t have the funds to have it professionally translated. (If anyone wants to help on that score, by donating some dough or a homemade translation, I’d be too happy to accept.)

It’s a very slick publication and gives the impression that EMI and Towa expected the movie to do well in Japan. I don’t know if it was any more successful there than in the rest of the world, though. It’s most impressive due to the many photos in it that were published nowhere else (as far as I know, as of this writing [and even as I’m writing this, I’m finding previously published examples]), and its use of misapplied pseudo-Americanisms, also present on the Japanese movie poster and promotional flyer.

The cover features the image most prominently seen on the picture sleeve for Roxy Music’s “Same Old Scene” Japanese single, released as a Times Square tie-in. The image also appeared in the press folder, on the inside of the soundtrack album, in the songbook, and in Movie 81 No. 2. The other shot, of Nicky and Pammy atop the Times Square Theatre marquee, previously appeared also in Movie 81 No. 2, and as a UK lobby card. The logo is a redesign of the US one, now incorporating a pair of portable headphones. 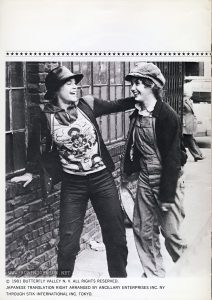 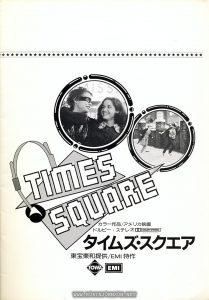 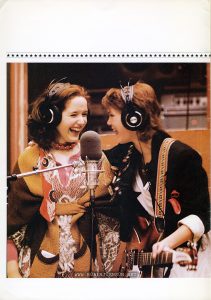 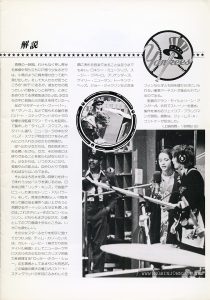 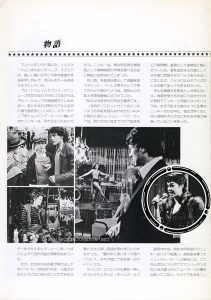 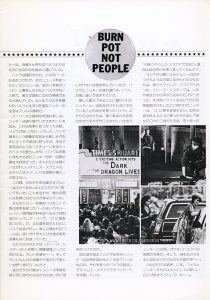 The inside front cover features a photo that had previously appeared, cropped differently and much smaller, in photoplay Vol. 32, No. 1.

The first small photo on the title page appeared, cropped much differently and in color, in the previously mentioned Movie 81 No. 2. The other led off the “interview” with Robin in Joepie No. 365, also in color.

Page 4 is a photo that had been a UK lobby card.

The small inset on page 5 had appeared in color in both Film Review Vol. 31 No. 1 and Movie 81 No 2. The larger photo is a first, I think: an actual frame from the movie (shown below). All the previously published photos had been stills taken at the time of shooting, or during pre-take run-throughs, none of which match up precisely with any similar images from the movie. The Yankees logo was probably there as a token of American and New York authenticity, and I’d bet appeared without the payment of any applicable license fees.

On page 6, the shot with Jay Acovone as the plainclothes cop, and the large photo of Mr. Pearl watching Pammy in the Cleo Club, are making their first, and possibly only, appearances here. The shot of Nicky with her guitar in the hideout is making its first appearance, but will turn up later in color. And the inset of Nicky singing Damn Dog had seen print in color in Joepie No. 365.

On page 7, the shot from the concert in Times Square had appeared on the sleeve for the UK soundtrack sampler. Nicky kneeling on the theater marquee with Pammy standing behind her, is similar to others that had already seen print but is making its first appearance here. The shot of Nicky and Pammy squeegeeing windshields is another frame from the film (!). And the “Burn Pot Not People” button probably signaled “American subculture” to a Japanese audience, but the most generous I could be is that it might be an unfortunate leftover from an early draft of the script, which I doubt anyone involved in making this program book had any knowledge of. 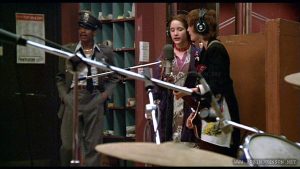 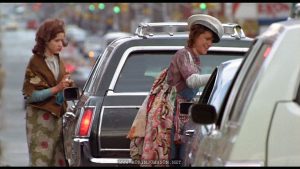 This booklet is 24 pages in total. Another batch of pages next time.

The front side of this approximately 7.5 by 10.5 inch sheet reproduces the Japanese movie poster, the only difference being the absence of the credit for EMI at the lower right.

The back is breathlessly loaded with more information about the film, the girls, and the soundtrack than you’d think could possibly exist, and if anyone wants to translate it or help pay for a professional translation, I’d be happy to provide all the details hidden therein.

January 21, 2021 I’ve learned recently that this type of two-sided flyer is called a Chirashi, and they’re a wildly popular item of movie memorabilia in Japan, being identical to but much smaller than the posters they replicate. They tend to have artwork unique to the Japanese market on one side (which this Times Square chirashi certainly does), and information about the film and the theaters it’s playing in on the other. They’re distributed for free but only in the theaters where the movie is playing, during its run. There is no Western equivalent. Some art houses in the US will have postcards advertising upcoming shows in stacks in the lobby; that may be the closest thing.