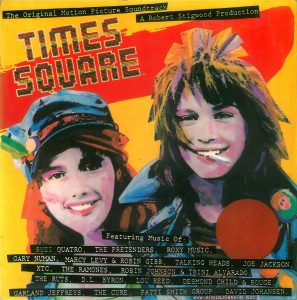 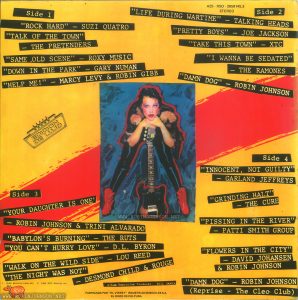 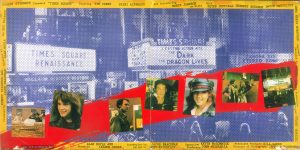 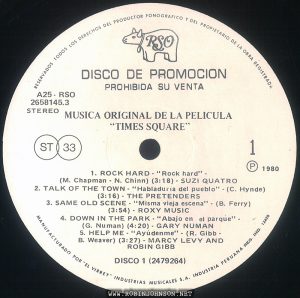 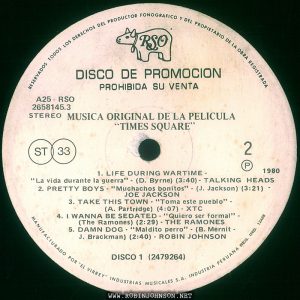 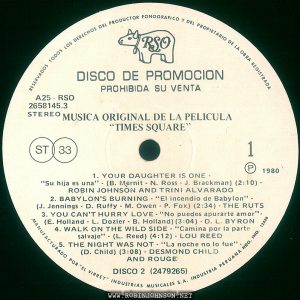 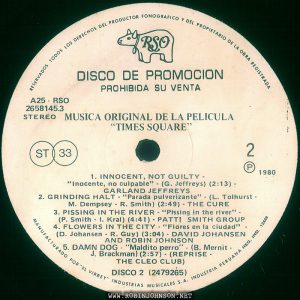 RSO had evidently come to the realization that Robin was the film’s major selling point, so they sent her to England accompanied by her mom to promote Times Square’s opening and herself. The interviews she gave must have occurred even as the bad reviews started coming out, but they were published after. Along with the teasing of RSO’s plans for her future projects, she wasn’t hesitant to gripe in public about the poor editing of Times Square. She even agrees here that the script wasn’t all it could have been.

ROADRUNNER ONCE, sipping cocktails in the hyper-high-rent confines of Mayfair’s Inn On The Park hotel. A Daimler limousine purrs up to the entrance and I’m ushered into it. Inside sits a dark, diminutive, refined looking girl and her ma. The former is 16-year-old Robin Johnson, star of trash epic ‘Times Square’. Not that anyone who’s seen the film could possibly guess.

The amoral urchin with the matted hair has been transformed into a veritable princess. Only the scratchy, street-wise Brooklyn larynx remains the same. So what’s all this nonsense? I gesture, referring to incongruity between our present surroundings and those of the film.

“That was only a movie and this is real life,” she replies matter-of-a factly, “though I don’t travel everywhere like this. For longer journeys we use trains.”

A quick-witted likeable young lady, seemingly unaffected by success. Both her feet are square on the ground and she makes clear that because she’s missing a lot of school, ma got clearance from the principal and lavishes her with lots of homework. At the moment, however, she just wants to learn Cockney rhyming slang.

As we’re going through the basics, we arrive at the theatre showing ‘Joseph And The Amazing Technicolor Dreamcoat’ and out she gets. So much to do and see during a short promotional visit…

ROADRUNNER TWICE. Robin and her manager / ma have gone on to a whistlestop tour of the provinces. Birmingham. Manchester and Glasgow are all in the past. She’s just arrived in Newcastle, and New York seems a long way away.

How were you enlisted for ‘Times Square’? I wonder, courtesy of the GPO.

“Enlisted!?” she shrieks down the phone into my Notting Hill pad “yeah, I guess that’s it. I was drafted! Really! One day after school I was hanging out across the street with some friends and a guy came up and said ‘are you 16?’ I said ‘yeah, why?’ so he tells me there’s an ad in the Village Voice requiring someone like me for a film.” she rasps, sounding like one of the Jets gang from West Side Story’.

“He told me the storyline, assured me there was no sexual exploitation and gave me a number to ring. Well,” she goes on barking, “the summer vacation was coming up, I had nothing to do so I called it up just for a goof.”

Goofing or otherwise, she’d made contact with the mighty Stigwood empire, went on to pass the audition and got signed for the major role in the first of three films. In the next, she stars opposite Andy Gibb in ‘Grease 2’.

‘The funny thing is,” she prattles amiably, “no-one knew who the guy was or have seen or heard from him since. God must have sent an angel from Heaven!”

Scarcely an overstatement, if you think about it. in the course of the film, Robin comes out with some fairly choice language. Did this come naturally? “Oh, I’ve been known to curse in my time,” is the riposte. “Actually, the voice and mannerisms are pretty much me. For the third movie I do, the script will actually be tailored with me in mind. That’s the best kind you can do.”

I point out that the script in ‘Times Square’ was pretty naff. In fact, it ruined the film.

“Yeah,” she agrees, “and it was edited pretty badly, too. I actually found it disorientating because there’s stuff said which pertains to earlier scenes that were cut. But I was happy with my performance even if the film in general could have done with being better.

“In America,” she admits, “it hasn’t done as well as expected, with some major distributors pulling out. Maybe the time and market weren’t felt to be right,” she continues sensibly, giving the impression that she’s spent a lifetime in the game.

A bright spot, however, is the ‘Times Square’ soundtrack, featuring, amongst others, delicacies by Talking Heads, The Ramones, Lou Reed and The Pretenders. Is that your sort of music?

“Oh yeah,” she enthuses, “that’s what I listen to all the time. New wave, The Clash, Blondie, Roxy Music … I saw Bryan Ferry in Manchester after their show there. He seems like a nice fellow. I thanked him for the song on the soundtrack (‘Same Old Scene’} which I like very much. Hey! I’d have told him if I didn’t!”

How was the Roxy gig?

“Oh it was great and it was nice to see the local teenagers.”

It was nice talking to Robin Johnson, a bright star on the ascendant, totally without phoney airs and pretentions. The lil’ gurl’s gonna be huge. Remember where you read it first. (The Daily Mail? — Ed).

ROBIN JOHNSON ponders becoming the next Chrissie Hynde as well as Liza Minelli.

She lists The Clash among the bands she listens to “all the time.” In an interview she’d done months before for Seventeen, she mentioned them as a band she hated, along with all punk rock (as distinguished from New Wave). I don’t believe she ever was the kind of person who would soften her artistic opinion to protect someone else’s feelings, so I’m guessing she’d never really listened to any punk rock until after Times Square was finished shooting, and then decided it was pretty good.

The photo is TS-69-34A/4 from the US Press Material folder, which was also printed for use by ITC to promote Times Square in the UK, and at some point in a full-bleed version, with no white border, numbered 69-34A-4. My copy of that one isn’t technically in mint condition. There was also a version numbered “6” which I believe was printed for use in the UK Press Kit.