“I love to sing but whether people like to hear me, is another matter.”

Times Square was a distant memory in the US in June 1981, when Dolly No. 128 came out in Australia. Alison Gardner’s interview with Robin covers little new ground, repeating Robin’s discovery on the steps of Brooklyn Tech and her then-still upcoming movie projects, although it does add a few little terrific tidbits like the fact that her discoverer wasn’t part of the Times Square production staff; the date she was officially cast; and that the first thing she was asked to do was lose five pounds. And most tantalizing, that there were the beginnings of plans for her to record an album, to be made between Grease 2 and her third film.

Seventeen-year-old Robin is every girl’s dream come true … She was “discovered” and turned into a star. One day Robin was watching films, the next day she was in them. How did it happen? Alison Gardner asked her

By now, 17-year-old Robin Johnson, star of the film Times Square, should need no introduction … Even if you haven’t seen the film yet, you can’t possibly have missed all of the press coverage Robin received when she visited Australia a few months ago.

Robin was big news in all of the papers, who were keen to tell her story and, on TV talk shows, where Robin was invited for a chat, interviewers couldn’t get a word in edgeways as she recounted her rise to stardom.

You see, it wasn’t so much Robin’s part in Times Square that everyone was interested in but how she got the part in the first place. Before Times Square, Robin had never acted in her life, not even in a school play. Now she has a three-film contract with the Robert Stigwood Organisation in America and her second film — due to start shooting later this year — is the follow-up to Grease. Robin has the female lead part opposite Andy Gibb.

Stories of shy young girls being plucked from the streets and made into Hollywood stars have filled reels and reels of film but Robin’s discovery — which would make a great film itself — isn’t quite so saccharine-sweet.

To begin with, Robin is not shy — as I soon found out when I met her. I am not the first journalist to comment on Robin’s ability to talk … and talk … and talk, seemingly without ever pausing for breath. Robin herself knows she talks a lot but shrugs it off as if to say “So what? It’s no crime”.

It certainly isn’t a crime, not if you talk like Robin Johnson. Oh, her English isn’t perfect but then, if you lived in Brooklyn (New York) yours wouldn’t be, either. Her voice is deep and a bit hoarse and her hands fly everywhere as she speaks, which made it necessary for me to sit well away from her as we talked. But Robin is a rare species from the acting world because she is interesting to talk to and totally uninhibited; she is witty, intelligent, cheeky, polite and great fun.

She seemed to treat her sudden fame a bit like a new toy and she was having great fun playing with it … Travelling around the world to promote Times Square gave Robin great joy and she was ready and willing to answer any questions I asked her. So, first off, how did she — a high school kid whose closest contact with showbiz was as part of the audience at the movies — get the part of the rough-and-ready Nicky Marotta?

“Well, it’s very conveniently Hollywood,” Robin said, sounding almost disgusted with this fact. “I was literally discovered on the steps of my high school by a talent-scout.

“I was standing outside the school with a friend and I heard this guy say to me: ‘Would you be about 16?’ I said: ‘You talking to me?’ I mean, what a way to approach someone! There are not too many things that are weird for New York but that’s weird.

“Anyway, he asked me again if I was about 16 and when I told him I was, he told me about this advertisement that was in a paper called The Village Voice for auditions for the film, Times Square. He said he thought I would be right for the part of Nicky Marotta. At first I thought the guy was a nut but he talked in detail about the film for an hour and I figured he couldn’t be making it all up.

“In the end, he gave me a card with a phone number on it and said if I was interested I was to phone the following Monday and ask to speak to Jake — who turned out to be the producer and screen-writer.”

Robin hasn’t seen the guy who “discovered” her, since. She later found out that he wasn’t connected with the casting for Times Square. “He hasn’t even come asking for his 10 per cent fee and I’m surprised about that,” Robin said.

Anyway, Robin called the number that Monday and her life has never been the same since.

“Before this I had never thought about acting as a career,” Robin told me. “Maybe in a wild thought, like ‘Gee, it would be nice to be an actress’ but never seriously. Me? In a movie? You’ve got to be kidding.

“But when I thought about it I figured I might as well phone. I had nothing to lose and everything to gain. I had the summer holidays stretching out in front of me and nothing to do so I was looking for ways to keep busy.”

Well, the auditions certainly kept Robin busy, not just for a day or a week, either . . . There was over 2000 girls auditioning for the part of Nicky Marotta but, by the end of the summer and after 20 different auditions, Robin was told she had the part.

“On August 24, 1979,” Robin announced, her voice taking on a very dramatic tone, “the casting agency called me and said: ‘You’ve got the part. Now lose 4kg and we’ll talk about it next week’. So, that was it — that’s why I’m sitting here talking to you.”

The fact that Robin did get the part, that the film has been a huge success, that she — the gum-chewing, fast-talking kid from Brooklyn — has been marked as a talent to watch in the future has not knocked her off-balance one little bit. She is not, she says emphatically, impressed by Hollywood. She doesn’t even like it there.

“In Los Angeles the people are so laid-back, they’re half dead!” Robin said. “I like the work I’m in now but I’m not overwhelmed by the people I meet and the places I get to visit.

“Anyone who hasn’t been involved in films thinks it’s glamorous . . . But what’s so glamorous about being in the Hudson River in the middle of winter? That’s where I had to be for one of the scenes in Times Square! You can get typhoid and pneumonia from that! It was only 10 degrees — I thought I had frost-bite!”

However, before Robin got involved in the film business, there was a lot she didn’t know herself.

“It’s so complicated,” she told me. “I didn’t know that actors had to do scenes over and over again. It’s a bit hard to do the same scene 15 times because it loses spontaneity. But I had a ball making the film.

“I don’t think I could settle in a nine till five job after this. It’s so interesting. Before all of this I wanted to be a lawyer. I would have graduated from school and gone to college but now those plans have been pushed into the background.”

Robin’s third film, which she will make after filming the sequel to Grease, has not been decided on yet. To keep her busy, though, there may be an album.

“I love to sing but whether people like to hear me, is another matter,” Robin said, smiling.
Acting is another love of Robin’s now and something that she says she didn’t find very hard, despite her lack of practical experience.

“I didn’t think about what I was doing, I just did it,” she told me. “That I didn’t have to change my accent or mannerisms for the part helped, too,” Robin added.

Robin saw a few similarities between herself and Nicky Marotta, the main one being their rebelliousness.

“All teen-agers are rebellious at some stage but I think I am permanently rebellious,” Robin laughed. “I don’t like authority. I can take it from my mother but no one else.

“In the film, Nicky likes to do outrageous things and I have done some things like that — although not quite to Nicky’s extreme. I’m more stable than Nicky is and more secure, too. I have a great family life.”

Unlike Nicky, too, Robin’s future is definitely rosy. True, she isn’t any Brooke Shields or Tatum O’Neal but then that’s their problem, not Robin’s . . . She has lots of talent and a style all her own and I think it’s going to take her a long, long way.

Most of the articles in the magazine have a photographer credit. This one doesn’t, which is unfortunate, since the four photos of Robin accompanying the article never appeared anywhere else. At first I thought they might come from the same source as the Mirrorpix shots from March 1981, but on closer examination, I don’t think so. Her outfits are less baffling and more just 1980s in style, and most telling, the shape of her eyebrows is entirely different. 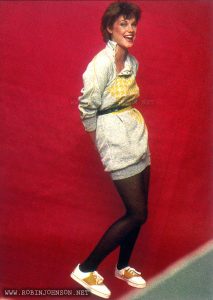 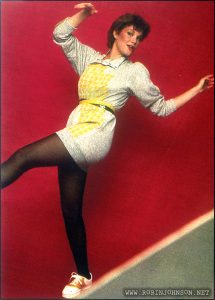 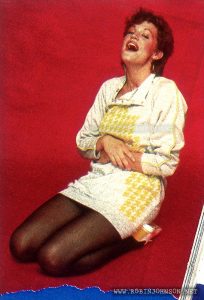 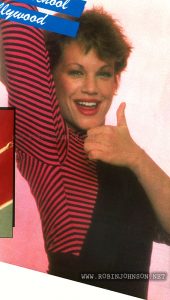 Alison Gardner has at least two other articles in this issue of Dolly, so it would seem she was one of the main staff writers, if not the main one. She vividly describes what it’s like to talk to Robin in person, but also mentions that Robin had been in Australia several months before. While it’s possible Dolly had a travel budget big enough to cover a round trip flight to New York for a story billed sixth on the cover, I think it’s more likely that the interview was actually a few months old.

But if there’s one big takeaway from this, it’s that Robin seems to have made a bigger splash in Australia than anywhere else in the world.