… was the title of the soundtrack sampler released in Japan. 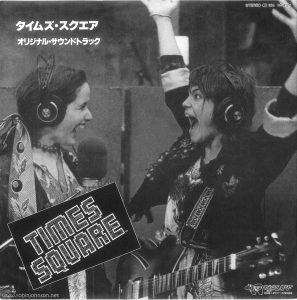 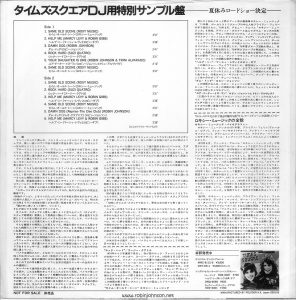 The picture sleeve is very thin paper, practically newsprint. The image is one used in the film strip on the UK soundtrack sampler. Unfortunately, I cannot read Japanese, and Google Translate does a very bad job of translating Japanese; I also have little confidence in the accuracy of the OCR program I used, which certainly contributed to Google’s poor translation. I can say that the notes consist primarily of a long synopsis of the film, a far more breathlessly detailed one than appeared on the UK sampler. And, like the UK sampler, the synopsis writer seems to have been working from an early screenplay draft: Google translates the paragraph describing the opening scene as “But, it was called a police car came immediately pop out who the shop, it will be what about that girl one of the 15-year-old, and brandishing knives also vain take the presser, and she had been admitted to hospital existence for regulating bell of mental disorder as a habitual of youth crime.” “Brandishing knives” would seem to refer to the original screenplay, in which Nicky pulls a knife to defend herself against some “roadies” at Starship Discovery One; the movie replaces the knife with a crowbar, and the roadies with Elizabeth Peña and the boss’s car. 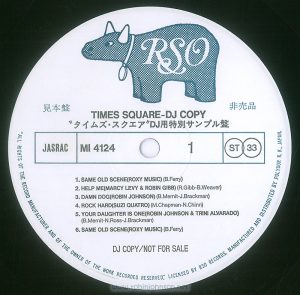 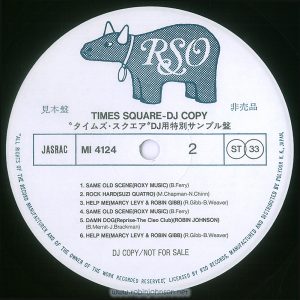 There are a full twelve tracks on this sampler, but only six songs. “Same Old Scene” appears a total of four times: it opens and closes Side One, leads off Side Two, and is Track 4 on Side Two. “Help Me!” is track 2 on Side One and tracks 3 and 6 on Side Two. And “Rock Hard” is Side One’s track 4 and Side Two’s track 2. These are the three songs that make up Side Two of the US sampler; of these, only “Same Old Scene” appears on the UK version.

If anyone is willing and able to translate the liner notes, I’d be very grateful. Meanwhile, we’re stuck with Google Translate, which can really only get across the gist of Japanese and not its detail. It does, however, occasionally come up a wonderfully evocative turn of phrase:

“Fly to take the plunge into the darkness, zombies!”

I do standing jump to the new world with sauce!

“See you in Times Square at 12:00. Miscreants go painted black around the eyes…”

… singleness of purpose, was now a star that was born out of the girls…

There’s also a fairly good chance this was actually released in 1981.