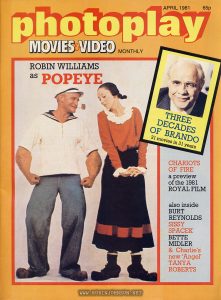 The Paul Wilson Column (“The man you want to read every month…”) in the April 1981 photoplay contained a brief bit of publicity that was typical of the coverage Robin and Times Square was getting by now in Great Britain (where the movie had long since closed) and Australia: it admitted the movie was “not particularly good,” but crowed about her “remarkable” performance, while retelling the legend of her discovery and pushing her three-picture deal and upcoming starring role in Grease 2. 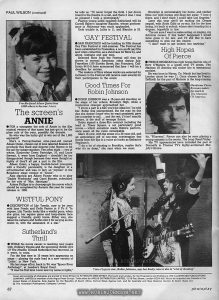 I don’t believe the quote that generated the photo caption appeared anywhere else, which implies that Wilson may have actually spoken with Robin. Other than that, however, there’s nothing new here: the publicity machine had abandoned Times Square and was focusing on Robin herself. 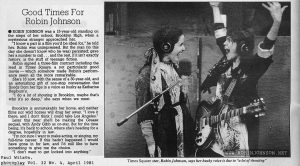 • ROBIN JOHNSON was a 15-year-old standing on the steps of her school, Brooklyn High, when a mysterious stranger approached her.

“I know a part in a film you’d be ideal for,” he told her. Robin was unimpressed. But the man (to this day she doesn’t know who he was) persisted; gave her a number to call… and the rest, if it isn’t exactly history, is the stuff of teenage fiction.

Robin signed a three-film contract including the lead in Times Square, a not particularly good movie — which somehow made Robin’s performance seem all the more remarkable.

She’s 16 now, with the sense of a 30-year-old, and an astonishing gift of non-stop conversation that floods from her lips in a voice as husky as Katharine Hepburn’s.

“I do a lot of shouting in Brooklyn, maybe that’s why it’s so deep,” she says when we meet.

Brooklyn is unmistakably her home, and neither films nor wild horses will drag her away. “I love it there, and I don’t think I could take Los Angeles.”

Later this year she’ll be making the Grease sequel, with Andy Gibb as co-star. But for the time being, it’s back to school, where she’s heading for a degree, hopefully in law.

“I’m not sure I want to make acting, or singing, my full-time career. If this hadn’t happened I would have gone in for law, and I’d still like to have something to give me the choice.

“I don’t want to get locked into anything.” 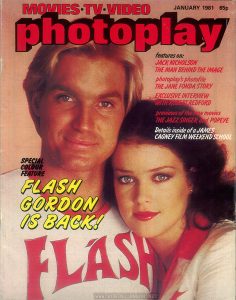 The January 1981 photoplay featured a cover story on, what else, Flash Gordon.

It also contained a review of Times Square, attributed only to “M.B.”

M.B.’s review is atypical, not in that it likes the movie — spoiler, it doesn’t — but in that it goes out of its way to make the point that both Trini’s and Robin’s performances are “weak”. Most of the contemporary reviews were negative but they generally had praise for the girls’ performances.

STORY — Nicky, a young punkette suffering from “anti-social behaviour”, and Pamela, a misunderstood little rich girl who cracks up at one of her dad’s political meetings, are room-mates in a psychiatric hospital. After a shaky start they become friends and decide to run away together. They steal an ambulance for their getaway and set up home in a derelict warehouse, just round the comer from Times Square. Following their plight is local DJ, Johnny LaGuardia. He encourages them as they rename themselves The Sleaze Sisters, sing a few anti-establishment songs, break up TV sets and cover Times Square in graffiti. They become cult heroines and organise a midnight rock concert in Times Square, but the police and Pamela’s father are waiting.

VERDICT — It’s another of those movies about rebellious youth set to rock music. Sound familiar? Whereas Breaking Glass, Quadrophenia and the like have managed to depict the subject fairly successfully, Times Square fails. It’s too naive, the performances of the two girls are weak and even Tim Curry does little to liven up the proceedings. The soundtrack is reasonable, featuring music by The Pretenders, Roxy Music, Gary Numan and Joe Jackson. M.B.

The accompanying photo is from the scene after the girls escape from the plainclothes detective chasing them through the Adonis Theater. I believe this is its first publication, but I think we’ll see a better quality version in the future. 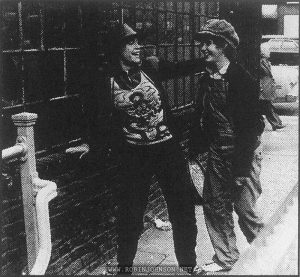 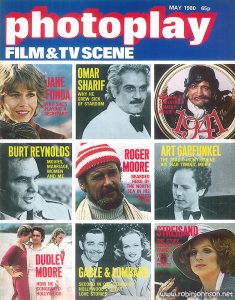 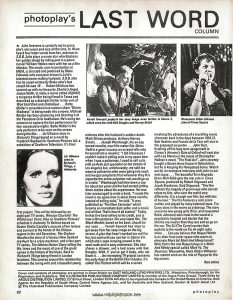 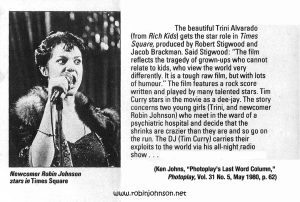