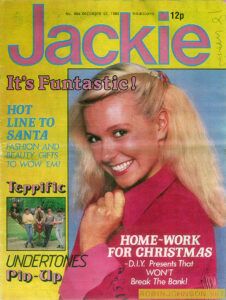 The December 13, 1980 Jackie led off their “Hot Gossip” section on page 36 with a promotional piece for the Times Square soundtrack album, attached at the layout to a promo piece for the debut album by The Professionals, providing the extremely tenuous and only known link between Times Square and Ladies and Gentlemen, The Fabulous Stains. 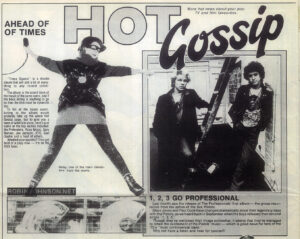 AHEAD OF OF TIMES

“Times Square” is a double album that will add a bit of everything to any record collection.

The album is the sound track of the movie of the same name, and if the track listing is anything to go by then the film must be dynamite too.

To list all the bands contributing to the album would probably take up the whole Hot Gossip page, but to give you a taste of what’s in store, here’s just some of the top names included: the Pretenders, Roxy Music, Gary Numan, Joe Jackson, XTC, Suzi Quatro and a host of others.

Whetted your appetite? Then get hold of a copy now — it’s on the. RSO label.

[photo caption:] Nicky, one of the main characters from the movie.

There’s nothing here we haven’t seen before. The picture is an edited version of #34 from the UK series of publicity stills.