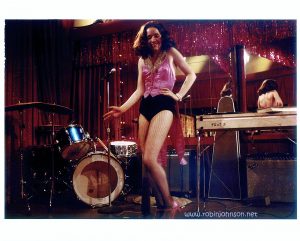 Despite recent appearances, this is a Robin Johnson site, not a Times Square site. But, for better or worse, there’s far more Times Square material out there than for the rest of her career combined. Plus, the vast majority of her fans (though not all) found her through Times Square. So I’ll be posting the occasional Times Square item that Robin isn’t in. And today, I’m also breaking my general rule about one item at a time, because these two are so close together in the film. 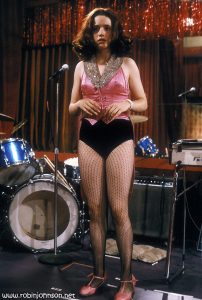 The first is one of the 8″ x 10″ color prints on Kodak paper, and shows Pammy in the middle of demonstrating her new moves to another Cleo girl. The second is the second of the slides, and shows her reacting to seeing her father in the club. Again, they don’t match up to the shots used in the film, mostly because the POV seems to be standing directly behind where the other dancer is sitting. The first shot might conceivably have been taken during the actual take, but Trini’s hands and feet are in different positions in the second one than they appear in the film.

This scene is notable for containing one of the few appearances of the “Doomsday Book,” the giant ledger Pammy bought to document her and Nicky’s lives in a scene cut from the film, and which Nicky methodically burns page by page at the end. It’s visible lying on the keyboard in the first picture. It’s the one thing Pammy grabs as she runs out of the club.

That’s all I have to say about that. I’ve been unsuccessful so far in figuring out the location of whatever bar served as the Cleopatra. If I ever do work it out, you’ll be the first to know.

Here, for tradition’s sake, are the closest frames from the film: 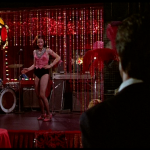 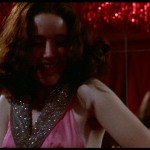 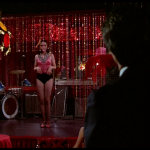