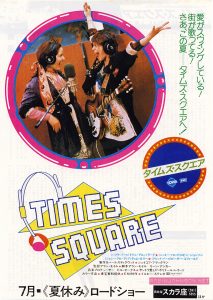 Was it the Japanese distributor being one of those who went all-in on promoting Times Square, or was it par for the course in Japan for a movie like Times Square to get not one but two of these 2-sided handbills? Either way, here is a second chirashi. The first one was a replica of the Japanese movie poster; this one’s design seems more based on the program book. 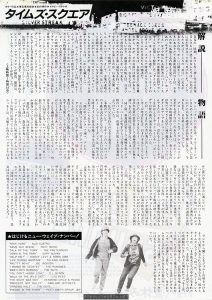 As before, I have no real idea what the text says, but it seems to be a very detailed synopsis with a bit of production history and a plug for the soundtrack — exactly what you’d expect on something like this.

The front side of this approximately 7.5 by 10.5 inch sheet reproduces the Japanese movie poster, the only difference being the absence of the credit for EMI at the lower right.

The back is breathlessly loaded with more information about the film, the girls, and the soundtrack than you’d think could possibly exist, and if anyone wants to translate it or help pay for a professional translation, I’d be happy to provide all the details hidden therein.

January 21, 2021 I’ve learned recently that this type of two-sided flyer is called a Chirashi, and they’re a wildly popular item of movie memorabilia in Japan, being identical to but much smaller than the posters they replicate. They tend to have artwork unique to the Japanese market on one side (which this Times Square chirashi certainly does), and information about the film and the theaters it’s playing in on the other. They’re distributed for free but only in the theaters where the movie is playing, during its run. There is no Western equivalent. Some art houses in the US will have postcards advertising upcoming shows in stacks in the lobby; that may be the closest thing.