Pammy and Nicky On the Run 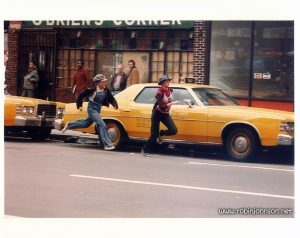 This is an 8×10 print, showing the full 35mm frame, of Nicky and Pammy running from the plainclothes detective, about to turn left and duck into the adult theater. The paper it’s printed on, as are most of the next batch of photos I’ll be posting, is stamped “THIS PAPER MANUFACTURED BY KODAK,” which was used on Kodak paper from about 1972 to 1989, leading me to believe it was printed at the time of the film’s production.

The most interesting thing about that shot is that, like the rest of these Kodak paper stills, it doesn’t actually appear in the film. The shot in the film is from in front of them, not from across the street, and even taking that into account, there’s no point in the film where the girls are in quite those positions relative to each other. This screencap is the closest image in the film. These pictures (and nearly all the other promotional photos as well) are from either rehearsals or unused takes, and I find it hard to believe that with their relatively low budget and tight schedule, and the problems involved in filming on a New York City street, they would have done a full run-through like that without rolling film, just in case.


In the commentary track on the 2000 Anchor Bay DVD, Allan Moyle identifies the theater as the Victory, and remembers it being the one Robin performs on the marquee of at the end of the film. He asks Robin to confirm it, but she has no memory of it. This was the first time he’d seen the film in 20 years, and he might not ever have seen the released version until then, so he can be forgiven for being wrong on every point there. 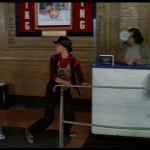 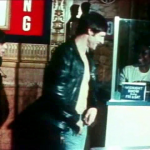 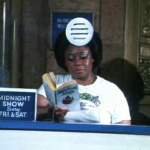 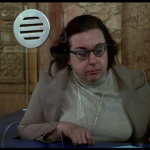 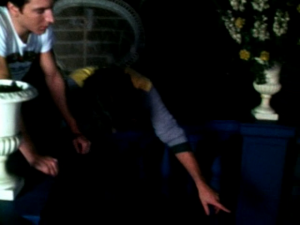 Unfortunately, the theater interior isn’t lit quite as well in A Night at
the Adonis, but all that seems to have changed in the two intervening
years are the flowers.

To top it off, the unflappable woman in the box office booth who watches Nicky and Pammy and the cop jump the turnstile is either Chelly Wilson, owner of the Adonis (as well as most if not all of the other gay theaters in the city), given a closeup in return for the use of the theater through a deal with location manager Ron Stigwood; or an extra carefully made up to look exactly like Chelly Wilson, because someone thought it was funny…? My money’s on the first option.