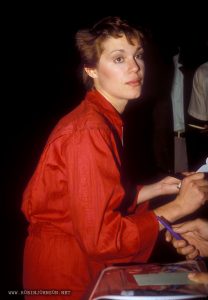 Nicky Marotta in the Studio 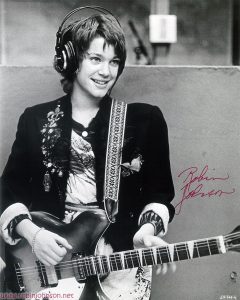 The WJAD studio, that is. This is an 8 x 10″ print with no border, with the little handwritten identification number 69-34A-4 added to the print in the lower right-hand corner. It was shot during the filming of the “Your Daughter Is One” performance, but doesn’t come close enough to any shot from the film to even try to find a similar image. At no point in the film does Nicky turn to her left and smile; she spends the entire scene facing the microphone.

This photo will appear again at least once, in the American press kit folder. That version is smaller, to allow for a border, and is cropped at the top and bottom, but shows a tiny bit more along the left edge. It has the same number, but it’s rewritten in a slightly different format, because the one that appears here is cropped out. I don’t know for sure that this one predates that one, but I have to make some kind of decision of what order to put these in. This series are all photos that don’t have “Times Square” printed on them.

Not on the front, anyway. This object has handwritten on the back in black ink, “Robin Johnson / ‘TIMES SQUARE'” at the top, and “Times Square” in yellow ink at the bottom. Those were probably added by memorabilia dealers or previous owners. You’ve probably noticed that it’s also signed on the front by Robin… yes, that’s really her signature. No, I’ve never met her. That’s an autograph from back in the day. This item came from England, so it was probably signed during her publicity tour for Times Square in January 1981. Should I have waited to post this until I get to the stuff from her trip to England? Too late, here it is.