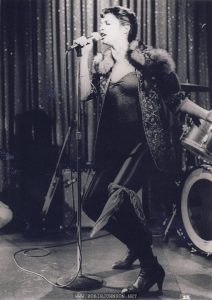 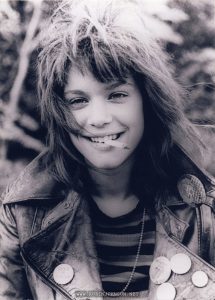 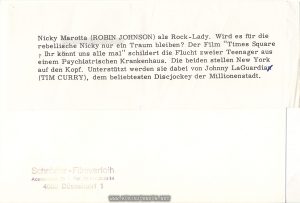 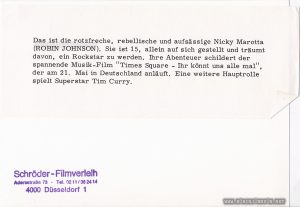 Back to the 8 x 10 Kodak prints… here’s another shot of Robin as Nicky dressed up as Aggie playing “Damn Dog” in the Cleo Club, and as always, there’s no frame in the film that matches up. The frame I’ve chosen is the only one where Robin has both hands on her guitar, is singing into the mic, and most importantly Artie has his hand up spinning his drum stick. But, not only is the shot framed entirely differently and from a different position, Robin isn’t even facing the same direction, and may not be singing the same word.

“Aggie Doon.” In the commentary audio track on the 2000 Anchor Bay DVD, Robin asks director Allan Moyle why they went with that name, and he doesn’t remember. I seem to remember hearing something about Nicky using a pseudonym because, after all, she’s wanted by the police, but I don’t remember where it was I came across that idea. That doesn’t really make sense, though, since Pammy is dancing under her own real name. The screenplay doesn’t explain it either.

Also on the commentary track, in the previous scene where Nicky reads her poem to Pammy, Moyle claims that Robin wrote part of it, and she’s gobsmacked because although she was writing and performing poetry at the time of the commentary’s recording, she has no recollection of contributing to “Damn Dog.” The reason for that is simple: she didn’t. The poem she recites in the film is almost word-for-word the poem Jacob Brackman wrote in the early draft of the screenplay, months before she was discovered; and unless she changed her name to Norman Ross, she didn’t contribute any of the changes made when it was turned into the song.

What’s my point? I guess it’s that Allan Moyle, bless ‘im, is something of an unreliable narrator when it comes to the making of Times Square.

More importantly, though… if Robin isn’t Norman Ross, then who is?

“Norman was one of my closest friends and was the backbone of my band for many years – a stellar guitarist. He was the soul of rock’n’roll incarnate. He died a number of years ago due to a lifetime of wretched excess.

“Specific to ‘Damn Dog,’ he’s responsible for the guitar phrasing of its signature lick – that ‘Dat-DAT-dut! Da-DAH-da-da-da…’ figure, which was in a sense Norman channeling Keith Richards. (The lyrics are Jacob’s with some revisions/additions of mine, and the melody and chord structure is me.)”

If you’re here reading this odds are the chords that kick off “Damn Dog” are burned permanently into your brain. If you play guitar you’ve had a bash at them more than once. They mean something to you in a visceral way. Can you imagine “Damn Dog” without that lick? Can you imagine “Times Square” without a song featuring that lick? Norman Ross created this specific thing without which the effect and the affect of the movie would have been immeasurably diminished. There’d be something missing from your life and you’d never know it.

It’s a shame he’s not around so we could express our appreciation directly, but at least we can now keep his name alive whenever we hear “Damn Dog” start up.

I dedicate this to Norman Ross, and all the other dinosaurs that got kicked outta the band.

“Words cannot express the sheer unbelievability of this performer and her material.”

Here we have Robin on set at the Cleo Club, in the full Aggie Doon getup. Her hair is now slicked back, and the cheap Kent has been replaced with an expensive Rickenbacker 360 (funny how both guitars she uses in the film have the nameplates removed from their headstocks — was that to imply they were stolen, or… or what?) . The screenplay features a scene in which she obtains the guitar from a member of the Times Square underground community; I don’t think it was ever shot.

(Incidentally, I’ve been thinking about the screenplay, and I’ve come to the conclusion that it’s not

the shooting script: it’s dated May 1979, Robin was cast in August, and principal photography happened in October and November. I think this may have been the version that sold the property to Robert Stigwood, but I don’t know how reliable it is as a guide to what was intended to end up on screen when the cameras started rolling. It is, however, all we’ve got at the moment.)

This image isn’t from a print, it’s from a slide. Apparently some of these promotional images were distributed as slides to magazines. It’s still one or two generations away from the original, but it’s closer than a print would be. I know of the existence of four of these slides. I have three of them. The fourth is the color Yoram Kahana picture in this post, and is in the hands of DefeatedandGifted.

When I see a Rickenbacker, I think The Jam, but that’s just me… Paul Weller chose to play a Rick because it’s so firmly identified with the British Invasion of the 1960s. Pete Townshend, John Lennon, George Harrison, Gerry Marsden… all played Rickenbackers, although generally they played the 330 model (or 325 in Lennon’s case); when they played 360s it was usually the 12-string version. You know who else played a 12-string Rickenbacker 360? Brian Jones. Yeah, the filmmakers gave Nicky a Rickenbacker for a very specific reason: as a callback to all the dinosaurs they were trying to celebrate even as Stigwood was trying to drag the film into the then-present. The tension between these two creative impulses is one of the film’s great strengths… and, it duplicated what was going on in the real world too (see: The Jam).

I probably don’t need to mention at this point that the image in the slide doesn’t actually appear in the film. There is no point at which both Robin’s hands are off the guitar while she’s still wearing it. This is the closest frame I can find in the film, and they’re not alike at all. First of all, the slide is portrait-style and the movie is landscape, as movies generally were before smartphones.

The scene where the girls trade their stuff to Andy for the guitar is entirely missing from the film, but we do see someone who fits Andy’s description and delivers his line “Where you been?” in a bit of business not in the screenplay. Could that be Andy? It’s not like there’s a character named Andy in the cast list —

Oh… Tiger Haynes, huh? What do you suppose he looked —

Hm. Well, the guy in the film is only in two shots, we never really get a good look at —

Yeah… that’s him all right.

According to Wikipedia, George “Tiger” Haynes was an actor and jazz musician most famous for originating the role of the Tin Man in the Broadway production of The Wiz. He died in 1994. His big scene, such as it was, was cut from Times Square, but by god at least Andy is in the movie, unlike Nicky’s deadbeat dad.