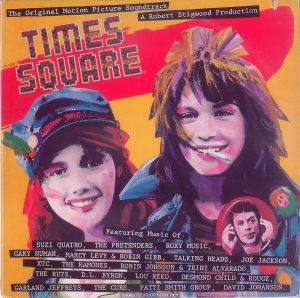 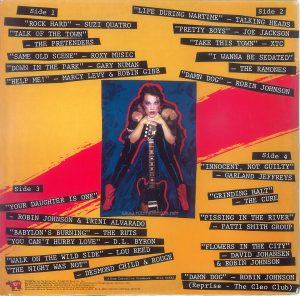 Finally, here’s what all the fuss was about. The 2 record set containing all but one of the songs from the film. In their haste to load the film with soundtrack material, they actually added one too many, and for some reason lost to time, the excellent “Dangerous Type” by The Cars was cut. 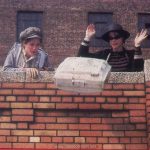 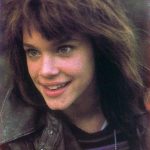 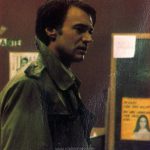 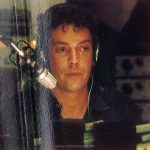 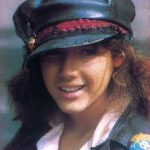 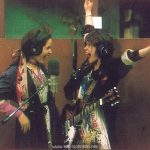 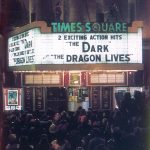 All but one of the photos on the inside gatefold were used at least once more, some several times – for instance, we’ve already seen the shot of Pammy and Nicky singing “Your Daughter Is One” on the cover of the Japanese “Same Old Scene” 45. 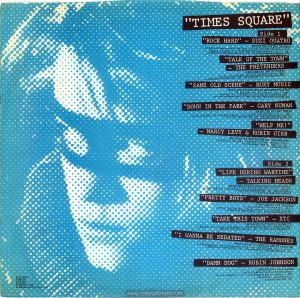 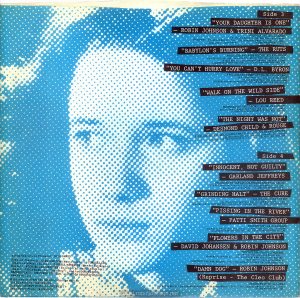 The album was released worldwide in 1980 and 1981, and never re-pressed or re-issued in any form. (If you have a CD, it’s a pirated copy.) Whether Robert Stigwood met his goal of reaping massive profits from the soundtrack, leaving the movie to act only as a bit of publicity for the record, I don’t know. I do know that for years, you could go into Sounds on St. Mark’s Place and be assured of finding at least one copy for $1.00. I also know that, unlike the movie, the soundtrack garnered nothing but good reviews, and gained cult status as a great collection of music long before the film achieved its own cult status. 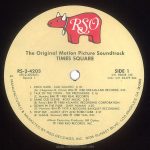 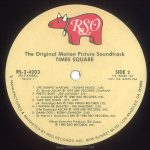 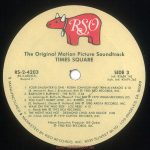 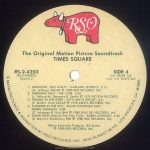 “Talk of the Town” is the single version, not the edited version released on the Pretenders’ Extended Play and Pretenders II. It’s the version used in the video and eventually found a home on the collection The Singles.

The version of “Down in the Park” seems to be the same basic recording as the version on the album Replicas, but is missing a number of effects and synthesizer tracks. It’s also quite a bit different from the “early version” on Disc 2 of the Replicas Redux 2008 expanded edition. It has never been released on CD as far as I know.

“Help Me!” probably would have found a home on Marcy Levy’s debut album, had that ever been completed. She’d been signed with RSO since 1976 but that project never came out, and apparently she’s not exactly disappointed about that:

Born and bred in Detroit, Michigan she sang as Marcy Levy with myriad bands on the rock scene in the Motor City in the early Seventies before signing to RSO Records in 1976. ‘In the beginning they put me with a great producer called David Foster, but the album was never released.

‘It was an R’n’B album because I’ve always been involved in blues and soul, but they were always trying to pigeonhole me.’

“Damn Dog” is still missing Norman Ross’ writing credit. It’s on the sheet music, as we’ve seen, but for some reason it only appears intermittently on the records. It is there front and center on “Your Daughter is One,” at least.

“Flowers in the City” has never appeared anywhere else, even in a re-recorded version without Robin. It looks like starting with that song, David Johansen began a habit of making one-off recordings for other people’s projects and then moving on to something else.

I’ve long had a theory that “Flowers in the City,” the one song on the soundtrack that doesn’t appear in the film, was supposed to be the original closing theme, not “Help Me!”, but attractive as this idea still is I’ve yet to some across any real evidence for it.

Joe Jackson’s “Pretty Boys” and Garland Jeffreys’ “Innocent, Not Guilty” both seem to have been recorded expressly for the soundtrack. The sound recordings of both are copyrighted to RSO, and “Innocent” was engineered by the same person who engineered “Your Daughter is One.” Both songs would appear in totally new versions on the artists’ next albums, but to my knowledge these RSO-owned recordings have never been re-released.

Jimmy Iovine had recently come from producing Tom Petty’s Damn the Torpedoes album when he was brought in board to help produce the Times Square soundtrack, leading to the announcements that Tom Petty would appear on the soundtrack. That didn’t happen of course, but Iovine was producing D. L. Byron’s debut album This Day and Age at the time, and tapped him and his band to provide the backing tracks for both versions of “Damn Dog,” and a cover of “You Can’t Hurry Love.”

“Actually, ‘Shadows of the Night’ was written for Times Square. Jimmy [Iovine] had just finished mis-producing my first record. He was the Musical Coordinator/ Director for the film. I asked him about the plot… he gave me a brief synopsis… rich girl meets poor girl, they run away, hide on a pier, hook up with a late night FM DJ, and begin these strange communications, etc. So I took all that in, went home and sat down at the piano with my legal pad and pen, and ‘Shadows’ popped out in only what seemed like twenty minutes. Those are the best songs. The ones that don’t require any labor or crafting. They just write themselves, if you’re willing to get out of the way.

“The producers of the film couldn’t find an appropriate placement for the song. They came to me with a cassette of Graham Parker performing ‘Can’t Hurry Love’ live. So I suppose it can be said that my version was modeled on Parker’s.”

Graham Parker’s version had been recorded in 1976 and released on the promo only album Live at Marble Arch. That album itself had achieved its own cult status and was widely taped and bootlegged, but unlike Times Square it finally got a digital release in 1996 as part of the second disc of the greatest hits compilation Vertigo. It is recognizably the same arrangement, but much as I love Graham Parker, I think Byron plays it better. I may be biased.

Byron told the above story in this interview from 2012, in much the same words but with a few more details, such as that the original interest in “Shadows of the Night” (yes, the “Shadows of the Night” that would become a massive hit for Pat Benatar two years later) (can you imagine? “Shadows of the Night” making its debut in Times Square?) was as the opening number (which is Roxy Music’s “Same Old Scene” in the film, and was The Beatles’ “All You Need Is Love” in the May 1979 screenplay). And, again in my opinion, there is a good place for the song and, like “Flowers in the City,” it’s in place of “Help Me!” It would have been a perfect closing anthem for the movie. But, I suppose the fix was already in with Stigwood for anyone named Gibb.

And, last but not least, returning to announced songs that are missing from the soundtrack — whatever happened to David Bowie? I have a theory about that, too…

But first — I could have sworn that I’d found a reference in text to Bowie being included on the soundtrack while it was still in production, but if so I’ve mislaid it. The only references in print of a song that didn’t make it are to Tom Petty’s “Refugee.” If I’ve double-crossed myself and there is one such that I’ve posted and forgotten about, please someone point me to it. Otherwise, the only real clue is Allan Moyle’s recollection on the Anchor Bay DVD commentary track that there had been a Bowie song planned.

The only confirmation I ever got was in the form of an email from a Robin fan, who said

The Bowie song omitted from the soundtrack was a version of “Life On Mars?” which I have heard is quite different from the classic that we all know and love. He also recorded an alternate version of “The Night Was Not” (My personal fave on the soundtrack) with Desmond Child. A few years ago my wife recounted to me an interview she read in some rock magazine with Desmond Child in which he discussed the music he has done for film. The names of the movie and song struck her (as she’s heard me prattle on about it), as did his mention of Bowie, so she told me about it and it’s one of those things that just sticks in the back of your mind, you know?

I’ve searched for such a magazine/interview with no luck, and several inquiries to Desmond Child have gone unanswered.

As far as I know no such rerecording of “Life on Mars?” has ever surfaced, and there don’t seem to even be any promising bootlegs from that time; no evidence that anything at all was recorded. Now, this would have been just after the time Bowie had been recording Scary Monsters (and Super Creeps). When the video for “Fashion” was shot in October, it featured among its cast G. E. Smith, who had not played on the track or the album. He had been, however, a member of Desmond Child & Rouge for the album Runners in the Night, from which “The Night was Not” came. If Child and Bowie had been collaborating on a track, it’s likely that’s how Bowie and Smith met.

And that would be how Smith came to be in Bowie’s band on September 3, 1980, playing “Life on Mars?” and “Ashes to Ashes” on The Tonight Show with Johnny Carson. Carson introduced the songs as both being about space, but “Ashes to Ashes” is more about heroin addiction, and “Life on Mars” is about… a young girl escaping her awful home life by running to the movies.

In trying to do research for this post, I saw many posts about Bowie’s Tonight Show performance, wondering about the strange choice Bowie made in pairing the nine-year-old “Life on Mars?” with the new single. I think he had both the arrangement and G. E. Smith handy, because a new recording of “Life on Mars?” had been in the works for the Times Square soundtrack. This performance is as close as we’ll get to the mystery track. — In my highly speculative opinion. I point out again, there is absolutely no proof for any of this. But, it is a good excuse to watch this again:

is available through Amazon

. The rest of his work is available from Zen Archer Records.