Germany may have gotten Times Square last, but they got a set of 15 lobby cards to promote it with. At least, 15 that I’ve found, over several years, in two batches of 14 that each had one different card in them. While 15 sounds like a nice round number, I wouldn’t be surprised if more turn up sometime.

Here are the first three: 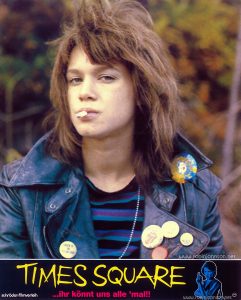 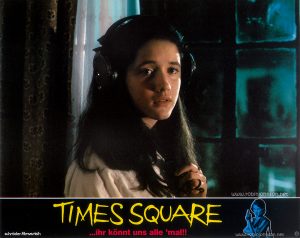 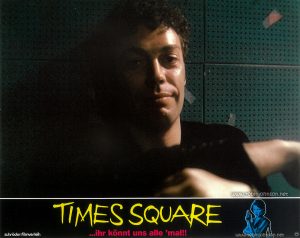 They’re not actually numbered, so I’ve put them in an order that makes sense to me.

These three distinguish themselves by all being a rarity in Times Square publicity: a photo of the actor, on set and in costume, looking directly into the camera. The first is familiar, the photo by Yoram Kahana that was taken at the same time as the shot which became the image on the soundtrack album cover and the North American movie poster, and which was at some point distributed as a slide (one of which is owned by DefeatedandGifted), and printed in Movie 81 No 2, as an inset on the Japanese movie poster, and in Filmstar Vol. 1 No. 6.

The shot of Trini made its only previous appearance, as far as I know, on a British lobby card.

But this shot of Tim Curry as Johnny, lounging in the WJAD control room, only ever appeared on this card.